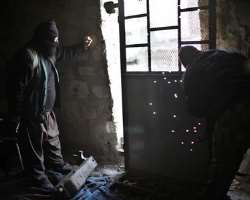 According to an audio tape posted online on Wednesday, Abu Mohammad al-Golani, leader of the Syrian group, said: "The sons of Nusra Front renew their pledge (of allegiance) to the Sheikh of Jihad Ayman al-Zawahri and declare obedience."

Golani said that his group was not consulted before the announcement and he heard about it in the media.

While admitting to receiving help from the Iraq branch since the early days of the insurgency against Syrian President Bashar al-Assad, Golani said Nusra Front would continue operating under its own banner, with loyalty to Zawahri.

"The banner of the Front will remain the same, nothing will change about it even though we are proud of the banner of the (Islamic) State and of those who carry it," he said.