My mistakes belong to the past – Liz Benson 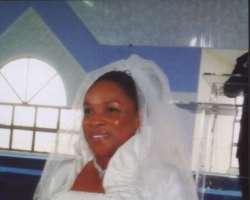 Known as Liz Benson, she was an actress who had featured in many Nigerian films. Now referred to as Liz Benson-Ameye, she talks about her new life

Where have you been?

I have been in Delta State where I now live with my husband. Together we run a ministry, Freedom Family Assembly. He has been in the ministry for a very long time and I have been an evangelist since 2006, when I was officially ordained. God brought us together and that is what I have been occupied with.

How was the transition from Nollywood to being an evangelist?

It was not easy. The calling of God is something that when it first happens, you begin to fret. You look at yourself and begin to ask questions like, 'why me?' and 'am I really worth it?' But thank God for His mercies. The truth is, God can decide to use anyone at any point in time. The most important thing is to submit oneself and after battling with it for a couple of years, it just dawned on me that I needed to submit myself and that is exactly what I have done.

So you battled it?

Yes I did. I was used to a particular kind of lifestyle, which I was expected to turn my back on and embrace a new life. It has to be devoid of all the vanities of life. When I got the calling, I knew I was special and that is why He chose me. Since then, I have not looked back.

Do you get strange reactions from people you minister to?

There is no shock because I don't think I am the first person who has been through this path. I know there are many people who have got a similar call but they have not just been able to really follow it through. I know some who were musicians but now run a very big church. Outside Nollywood industry, I know professionals who have answered that call. People are just so glad that I have been able to see the light. They are happy for me.

Are there things you miss from your former life?

Nothing whatsoever. Instead, I wish I had known the Lord before now. I have no regrets because I am positive that the path I have toed is what God has prepared for me and whatever mistakes I made in my past, remains in my past and I was meant to make those mistakes . I have gathered from them because mistakes are experiences, so you grow with them.

What mistakes are you referring to?

I don't have to enumerate them because I can't even remember them. It all belongs to the past. Everybody has a past without which there can't be a present and a future. When you are in Christ, all things become new.

Do you miss being on set?

Why should I? Don't you know people grow out of things? I have not grown out of being a performer but the thing is that as you get older, you begin to do other things that would improve people's lives around you even better than before. You have people who were bankers being absorbed into the entertainment industry, we have people who were in the entertainment industry, doing other things but the fact remains that we are sending a message to the people. But for me, it is a different message, which is a message of life and eternity. That is the best that can happen to any individual. So, I count myself really privileged to be called a servant of God.

In future, do you have plans of going back on set?

Are you insinuating that you will not play any of those bad girl roles any longer even if the pay is mouthwatering?

For me, it has never being about money, it is about the script and the message I am sending out there. To every professional, I think that should be the bane. If you feel strongly about a role, you go all out and do it. At times, the money might not just even be there but thank God for how far the industry has gone now. Many people are really able to make a living acting because then, we could not. Back then, we had more fame and very little money.

How well have you fared in your marriage?

As you can see, it's been wonderful staying married to my husband, Bishop Great Ameye. I am glowing. It looks like we have been married forever when in fact this is going to be the fourth year. We are like teenagers in love and I am enjoying every moment of it.

I met him in his hometown where we live now. I went to evangelise there. It is something that is very rare and some great men of God have told me that it is something that is rare to find. I mean, one who has been in the ministry meeting another person who has also been called by God and both of them are really strong in it. I just thank God because marriage has been wonderful. We have our challenges but we never let it stay past two minutes and we are done with it. We are two young people together and you can imagine us coming together. We take everything in the strides of maturity.

You are aging gracefully…

All the credit goes to my heavenly father and He has also given me a wonderful man who helps make it happen. I don't have any beauty routine. Maybe before I used to but not anymore. Now people tell me I look better than I used to.

It has always been that way for a very long time. At some point I had dreads also. This one is most convenient for me.

How have you coped living outside town where you were one of the happening babes?

In life, you can make action happen anywhere you are. So, for me, action is anywhere I am. Anywhere I find myself I make it happen. Today I am a happening babe for Christ.

What do you do for leisure?

I don't have time for that. I look at my husband, he looks at me, and we share the word of God. We do some little crazy things like children and play around.

What is your advice for the current crop of actors in Nollywood?

They should keep it going. The industry has done very well for itself. I see room for greater things in every area and I would also want to say that rather than criticise what God has given to us, we should help to build it and stop the tear-down syndrome. We should know that it is a lot of struggle to produce even the shortest film or documentary when you take into cognisance the necessary infrastructure around. The world has been opened for us and we need to take the centre stage.

Too Much Love Is Killing This Actors Career!

Tonto Dikeh Needs To Learn How To Sing – OJB

Regina Askia: 'Most Wanted' Actress In Nigeria And Arguably Africa In The 90s

Where is the Police when you need them?