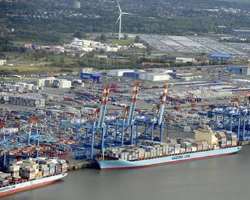 Buoyed by solid finances, roaring exports and low unemployment, Germany increasingly sees itself as the only grown-up in Europe, responsible for bringing wayward children into line to hold the family together.

The children are not enjoying it. Some, such as the Cypriots and Greeks and many Italians and Spaniards, are openly resentful of "Mutti" (mum), as Berlin officials privately call Chancellor Angela Merkel. Others, such as the French, are sulking.

The mood among German politicians and officials is one of economic self-confidence tinged with a sense of parental duty to provide the euro zone with stiff-backed leadership, even if that makes them unpopular in Europe.

"German policymakers have taken to their new found status with something close to gusto," Simon Tilford, chief economist at the Centre for European Reform, said in the latest edition of the London-based think-tank's bulletin.

"They routinely tell other euro zone countries how to run their economies, citing Germany as a model for the currency union as a whole."

The view from Berlin, set out by a range of policymakers who spoke on condition of anonymity, is that Germany has a unique responsibility for the survival of the single currency area as its biggest and most dynamic economy.

The subtext is that since the Germans are the main bailout contributors and have most to lose in any collapse of monetary union, they must ensure that their partners cut their deficits, implement reforms and avoid mistakes that could sink the euro.

German confidence in the ability of the European Commission and the European Central Bank to hold to a firm course without yielding to political pressure is limited.

Hence Berlin's insistence on involving the International Monetary Fund in all euro zone financial rescues and its own willingness to play bad cop, even if that means Merkel being burned in effigy or dressed in Nazi uniform by protesters.

Some European partners and many economists argue that her recipe of a synchronous fiscal contraction across Europe is deepening recession and raising unemployment and could turn the sovereign debt crisis into a social and political tsunami.

"Prolonging austerity today risks not achieving a reduction in deficits but the certainty of making governments unpopular so that populists will swallow them whole when the time comes," French President Francois Hollande warned last week.

"I perfectly accept that European countries have to be rigorous, and France first of all. But not austerity, because sticking with austerity would condemn Europe not just to recession but to an explosion."

In Berlin, such comments elicit a rolling of eyeballs. From Merkel on down, German leaders feel the French have not taken the measure of the crisis facing Europe and their own economy.

"There is a lack of will, a lack of awareness. What is needed is an emergency U-turn," said a Francophile German lawmaker, adding: "There is still no clarity over their deficit reduction plans."

SICK MAN
German leaders like to remind visitors that a decade ago their own country was depicted on the cover of The Economist weekly as the "sick man of Europe" for its rigid labor market, ineffective bureaucracy and low competitiveness.

"We are quite a good example of a success story," says one senior politician who was in opposition in 2003 when Social Democratic Chancellor Gerhard Schroeder pushed through a tough overhaul of labor laws and reduction in unemployment benefits.

Last month's bipartisan celebration of Schroeder's "Agenda 2010" program highlighted a broad consensus that the reforms had triggered an exemplary jobs miracle, even though many thousands in Germany now work for as little as 3 euros an hour.

Whatever the outcome of September's general election, a "grand coalition" also exists de facto on many policy issues between Merkel's conservatives and the Social Democrats.

When German officials are asked what joint liability they are willing to accept for borrowing or insuring euro zone bank deposits in return for stronger central control over national budgets and economic policies, the answer is to point a decade or more down the road without making a specific commitment.

"The problem is getting reforms in return for the present German solidarity in the crisis mechanisms," one official said.

When she contemplates the future of this ageing continent, Merkel's "reform or die" outlook is shaped by her experience of witnessing the collapse of her native East Germany.

At a mid-March EU summit on economic reforms, she drew the lessons of a slide-show by ECB President Mario Draghi, showing how wages had soared in southern states since the launch of the euro in 1999, far outstripping productivity gains.

Merkel said the crash course in macroeconomics highlighted how the gap had widened within the euro zone between countries with current account surpluses and those with deficits, and was an eye-opener for many leaders.

"It shows that high deficits are bad for growth," she said.

There are three risks with her strategy: that the economic policy that worked for frugal Germany may not work for Europe, that a country unable to cope with tough bailout programs may default, and that southern Europeans may rebel against mainstream parties and vote in anti-austerity governments.

Despite green shoots of improvement in Spanish exports or Greek productivity, the economic outlook for southern Europe is still darkening and the horizon for any recovery continues to recede while unemployment keeps on rising.

No program country has defaulted so far but Greece has repeatedly fallen behind on its adjustment, and its debt has ballooned despite a second bailout last year. Germany made clear it would have left Cyprus to default and leave the euro if Nicosia had rejected its bailout terms.

There is a strong prospect that a backlash against German-driven austerity policies will fill the European Parliament next year with a bumper crop of Eurosceptics and political radicals.

Faced with ever more unruly children, "Mutti" may eventually face a hard choice between the breakup of the family and more financial support for the poorer relatives.