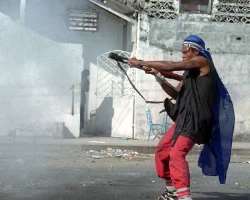 SAN FRANCISCO, March 31, (THEWILL) – Gunmen suspected to be members of the Boko Haram sect, Sunday, in Maiduguri, the Borno State capital, killed a lecturer in the Department of Mass Communication at the University of Maiduguri, Muritala Mohammed.

Residents of the town said Mohammed was apparently being trailed by the gunmen on his way back to his 202 Housing Estate home opposite the university at about 3pm.

The assailants were said to have caught up with him and killed him instantly as he tried to manouvre his car on realising that he was in danger at the junction to the 202 Housing Estate.

The lecturer, who died on the spot, was said to have won a juicy contract recently from a politician based in Adamawa State .

However, spokesman for the Joint Task Force (JTF), Lt. Col. Sagir Musa and the Police Public Relations Officer in the state, Gideon Jibrin, could not be reached for confirmation of the incident.