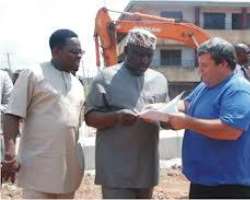 If it were in the last administration, what happened between Okorocha and his Deputy would not have occurred, because the Elders are there to control the excesses of the Governor, because, power intoxicates. Is it not a shame that just after 20 months in office, the Okorocha's administration is engaged in self indictment right from the top? Does any body need to be told that since the Deputy Governor was accused of corruption by his Boss, he too may not be clean. After all who is incharge and doles out patronages? Therefore, it is only whose teeth was seen that laugh more. Our people always ask this Question; can the chicken be different from the mother Hen? This is the time for the Okorocha administration to exhibit maturity and look for a way of sorting itself out. The people of Imo may not be saying it, but they are shocked with what is happening. This Agbaso matter has exposed Imo to ridicule. If you don't agree with me, check the media, including social sites.

-Henry Ekpe
Periodically, I would not want to dabble into this issue, as I'm yet to come to terms on the numerous controversies surrounding it. The matter has received so much vox-pop, and opinions also have been aired. If I must tell you, it is purely politically motivated. The scammed and scammer are all saying a different thing. Even those set-up to investigate it have also been bought over. Sorry, for now, and because of the current situation I have found myself, I would not like to comment on it so not to recklessly and angrily give or use the wrong words.

-Ugochukwu Favour-Mayor
The current imbroglio in Imo State between the Governor of Imo State, His Excellency Owelle Anyayo Rochas Okorocha and his Deputy, Sir Jude Agbaso has divided the state. Politicians, social commentators, writers and columnists and even the masses have been caught in the lines of the two divide. To the Deputy Governor to go down alone and that is the position that favours Imo Government House. Any supporter of the governor desires that we talk about the Deputy Governor's indictment and impeachment. They forbid you to ask that other quarters indicted in the report be not mentioned, for any reason whatsoever. On the other part you have those who hold the defence of the Deputy Governor. To this group the battle between the No.1 and No.2 citizens of the state is a political vendetta against the Senior Agbaso and benefactor of the later. This crisis has pitched people against the others. Even our media houses and practitioners are not spared in the ensuing debate. I have chosen to take a more extreme line. Yes because I reason unusually. I tend to operate from the back story. I like to ask pertinent questions. Questions many deliberately avoid.

-Kissinger Ikeokwu
There would have been the possibility of observing compliance with due process by ensuring that payments to JPROS were monitored and done based on evaluation of work done on the road. It is my belief that the lack of due process in handling the entire contract opened the room for the company to misappropriate the fund since he had enough money at his disposal. Assuming the contractor had absconded with the entire contract sum, that might have brought a bigger disaster to the Imo State Government. Be that as it may, I am not holding any body's brief but I must observe that the Simeon Iwunze-Led Committee did a thorough job.

-Emperor Nnabuihe Iwuala
The ownership of the account names and numbers tendered by JPROS can be easily verified, so can the authenticity of the SMS allegedly sent to JPROS by the Deputy Governor. These will definitely be of immense help in identifying who is behind the shady deal. In the meantime, the embattled Deputy Governor is quoted in the Nigerian Horn of 11th-12th March as saying among other things ".......... JPROS was a company introduced to the State by the governor who issued and gave the permission for a contract of the magnitude of N1.5bn. The Commissioner for Finance instead of routing the money through the ministry of works for the necessary due process documentation rather routed it through the Accountant-General and paid directly to the contractor..............". The Commissioner for Finance, Deacon Okafor had. During his interface with the House Committee investigating the matter reportedly said that the governor had directed orally in an Exco meeting that payment for road contracts be made direct to contractors by the ministry of Finance. It may well have been so but an officer of that stature who also has a banking background should have known that directives such as that are usually committed to paper for them to be implementable.