South Africa's Mandela back In hospital With Lung Infection 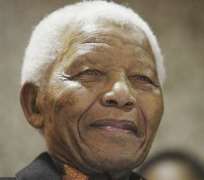 Former South African President Nelson Mandela has been admitted to hospital with a recurrence of a lung infection, the government said on Thursday.

A statement said the 94-year-old anti-apartheid leader was admitted shortly before midnight. It gave no further details other than to say he was receiving the "best possible expert medical treatment and comfort".

Mandela was admitted briefly to hospital earlier this month for a check up.

However, he spent nearly three weeks in hospital in December with a lung infection and after surgery to remove gallstones.

It was his longest stay in hospital since his release from prison in 1990 after serving 27 years for conspiring to overthrow the white-minority apartheid government.