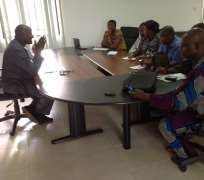 AT THE JUSTICE AND PEACE AND DEVELOPMENT COMISSION (JDPC)

It is pleasure to join our friends from the Justice and Peace and Development Commission (JDPC), our colleagues from the Ministry of Information and our partners in good governance, to exchange views on matters that are germane to good governance and especially dialogue in an open society.

Many years ago, Nigerians mortgaged their rights to dialogue with their leaders. Under the military, any form or dialogue or public discourse, was like a conversation with the deaf. Today, things have changed, and free speech and open dialogue are critical components of the democracy dividends we enjoy.

Yet all is not well. Today, in many parts of our country people and leaders engage in do-nothing politics, which has no value-added, but is remarkable for its disruptiveness.

Although we have the most vibrant press in Africa and an extant Freedom of Information Act, information about activities of government are hard to come by. Oftentimes, core government activities are simply nothing but opaque. Addressing such challenges requires a partnership between the Ministry of Information and organs such as the JPDC and our NGOS and CSOs.

It is common knowledge that today, people see government as a cash cow that should serve those few privileged to be in the category of the elite. Those few, who do not garner such windfall, openly criticize and bastardize the efforts of government. Such destructive criticism does not bring added value – rather it is defeatist and demeaning. Its goal is always to distract and distort.


Still, we know that improving governance or bringing about good governance must rest on several core principles: transparency, predictability, accountability, responsiveness and involvement of all relevant stakeholders. Only through such means – including holding workshop such as this – can we ensure purposeful governance anchored on ethical conduct, discipline, integrity and credibility.

As I have said elsewhere, do-nothing politics, when combined with greed leads to corruption. But do-noting-politicsmeans using and diverting government resources to personal use or sharing it out to individuals instead of using it for public interest matters. There is widespread celebration of mediocrity in the name of political accommodation and political settlement.

Governance is not a popularity contest.

Popularity should be left for Nollywood and Hollywood stars and for soccer stars in Premier Leagues. Good governance is about the faithful delivery of services to our people. But the paradox is that just as our people expect dividends of good governance, they also have conflicting popular expectations.

The general expectation that those in government have infinite resources to dole to out to friends and acolytes is wrong. But that is often the perception, which is indeed stronger than the reality. These conflicting popular expectations of those in political power are obstacles to improving governance in government. Indeed, conflicting popular expectations are a major source of unethical conduct in government and an important reason why poor governance persists in many aspects and facets of government. We need broad reorientation especially at the grassroots and in our churches and schools.

Nigeria's problem today, to paraphrase Fareed Zakaria, is that our “political system seem to have lost its ability to create broad coalitions that solve complex problems.”[1] We see such disconnect between the government and the people in matters of national minimum wage, unemployment, Boko Haram and challenges of fuel subsidy.

Indeed, the most serious developmental problem we face Nigeriais not corruption but greed and the “lack of repercussion for underachievement. Who in Nigeriais ever held accountable for substandard performance?”[2]

But we know we can do better. And we know that the masses can observe good governance and can speak up and indeed do speak up. We should take solace in the maxim vox populi vox Dei~~ the voice of the people is the voice of God.

Often, one finds that dialogue is a vital component of good governance. Therefore, the essence of dialogue cannot be overemphasized just as the right to dissent, which is in tandem with the constitutional right to free speech. Good governance is contextual; where it exists, it is always self-manifesting.

We have been told that in governance and adaptive leadership context counts. What this means is that in addition to our own values, priorities and sensitivities, we must also embody the values, priorities and sensitivities of our organization, state or nation. If the Peter Obi administration or the Babatunde Fashola Administration in Lagos represents purposeful leadership, how much of those values are embraced by the people; and how much is discountenanced by those who play dirty or self-serving do-nothing politics? Least I am misunderstood, we are not seeking cheap popularity or support for the government of the day or its policies including the novel but very productive and visionary Anambra Integrated Development Strategy (ANIDS). On the converse, we need constructive criticism to keep the government on its toes. We need dissenters, and at times, even traducers. In fact, experts tell us that to be proactive, and that “it is imperative to understand and articulate what others are saying, without necessarily endorsing their perspective”. [3]

In assessing government activities and governance, we must of necessity grasp the distinction between dialogue and verbal argument. The former is inclusive and seeks solution. The latter, according to Robert Green, “has one vital use in the realm of power: to distract and cover your tracks when you are practicing deception or caught in a lie.”[4] We are all witnesses to our distractive politics!

Let me end by saying that the Peter Obi administration support and value open discussion of its activities and good governance efforts. Our administration is equally transparent and accountable. We embrace dialogue and our continuous contact with the people. Our governor and his senior officials are accessible. Such attributes are far removed from the do-nothing politics of the past. That is the difference; and such difference is there for all to see. What is called for is continuity. I thank you for your kind atte