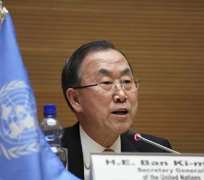 The United Nations said on Thursday it will investigate Syria's allegations that rebel forces used chemical weapons in an attack near Aleppo, but Western countries sought a probe of all claims about the use of such banned arms.

"I have decided to conduct a United Nations investigation into the possible use of chemical weapons in Syria," Secretary-General Ban Ki-moon said. He told reporters the investigation will focus on "the specific incident brought to my attention by the Syrian government."

The deaths of 26 people in that rocket attack have become the focus of competing claims Wednesday from Syrian President Bashar al-Assad's supporters and opponents, who accuse each other of firing a missile laden with chemicals.

The Syrian opposition reported a second chemical weapons attack on Tuesday near Damascus.

Ban made clear that the focus of the investigation he announced would be the Aleppo attack.

"I am of course aware that there are other allegations of similar cases involving the reported use of chemical weapons," he said, adding that the United Nations would be cooperating with the Organization for the Prohibition of Chemical Weapons and the World Health Organization.

U.S. Ambassador to the United Nations Susan Rice said that Washington wanted any serious allegations regarding the use of chemical weapons in Syria to be investigated.

"The United States supports an investigation that pursues any and all credible allegations of the possible use of chemical weapons in Syria, and underscores the importance of launching this investigation as swiftly as possible," Rice said in a statement.

DEADLOCK
France and Britain wrote to Ban on Thursday to draw his attention to the second alleged attack near Damascus, as well as well as one in Homs in late December. The rebels blame Syria's government for all three alleged chemical weapons attacks.

Russian Ambassador Vitaly Churkin said on Wednesday that the British and French demand for an investigation into other attacks was an attempt to delay the U.N. probe of the Aleppo incident. He praised Ban's decision to begin an investigation.

The dispute over the scope of the U.N. investigation highlights the chasm between Russia's position toward the Syrian government, its ally, and that of the Western powers who support the opposition trying to oust Assad. The deadlock on the council has left it powerless to act on Syria.

U.S. and European officials say there is no evidence of a chemical weapons attack. If one is confirmed, it would be the first use of such weapons in the two-year Syrian conflict, which the United Nations says has killed 70,000 people.

Syria is not a party to the Chemical Weapons Convention, an international treaty that bans chemical weapons. For months the United States, Israel and European countries have voiced concerns about the security of Syria's chemical arms stockpile.

Ban urged the Syrian government and rebels to cooperate.

"There is much work to do and this will not happen overnight, it is obviously a difficult mission," Ban said, adding the probe will begin as soon as possible.

He said the probe "should serve as an unequivocal reminder that the use of chemical weapons is a crime against humanity."