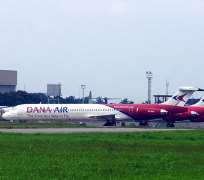 SAN FRANCISCO, March 17, (THEWILL) – The Ministry of Aviation Sunday said Dana Air was grounded because of a safety issue with the batteries of the one local carrier’s aircrafts, Aviation Ministry spokesman, Mr. Joe Obi, told a new foreign news agency.

“We did it for a safety precaution…

“The flights are suspended, but they still have their license,” Obi told Bloomberg during a telephone conversation.

The airline in a statement on its website confirmed the development saying, “We regret to announce the temporary suspension of our flight operations following a directive from the Ministry of Aviation through the Nigerian Civil Aviation Authority (NCAA) on Saturday, 16th March, 2013...”

Dana lost one of its planes in June last year following a fatal crash that killed over 140 passengers and entire crew.