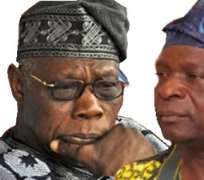 Obasanjo and Oyinlola
A reconciliation meeting of the Peoples Democratic Party slated for Friday in Ibadan, the Oyo State capital, suffered a setback as former President Olusegun Obasanjo and former governors of Osun, Oyo, Ekiti and Ondo states were absent.

The ex-governors are Olagunsoye Oyinlola, Adebayo Alao-Akala, Segun Oni and Olusegun Agagu respectively. They all boycotted the party's South-West National Chairman's Town Hall meeting.   The meeting was part of the party's efforts at reconciling aggrieved members ahead of future elections.

The National Publicity Secretary of the PDP, Olisah Metu, who described the meeting as very successful, however, ascribed Obasanjo's absence to his busy schedule.

He said, 'The former President, as you and I know, is an international figure and a busy personality. He was the former BoT chairman; his loyalty to the party is not in doubt. I don't know whether he is in the country or not.

'As a party, we are more worried about our internal challenges. I am impressed at the turnout at today's meeting. The purpose of this meeting is to address the dispute within the party in the zone, but on getting here, we are impressed with the turnout. We have former governors, senators and serving office holders here at the meeting.

Earlier, the National Chairman of the party, Alhaji Bamanga Tukur, had expressed optimism that the PDP would regain the South-West from the Action Congress of Nigeria.

Tukur urged the party members and other stakeholders to strategise ahead of the 2015 elections so as to regain the zone.

He said, 'You are the rightful people that should be in governance in your respective states. If you don't get power, you can't serve your people. Please reconcile so that this can be achieved.

'South-West is very strategic. Eliminate them with your votes. I want the caucus to meet and reconcile the parties. Let this be the last time that the South-West will be under any party other than the PDP.'

The Reconciliation Committee chairman of the PDP in the South-West, Chief Ishola Filabi, said, 'We are happy that you have come to our zone to encourage and energise us for the onerous task of rebuilding our party and re-invigorating our capacity to win elections in the years ahead.

'Since we lost the control of government in Ogun, Oyo, Osun, Ondo and Ekiti states, things have not been the same with us. Bickering, in-fighting and factionalism have become the order of the day and they threaten to incapacitate us if not checked.

'Already, we have begun the necessary consultations in order to lay the foundation of our strategy and agenda for reconciling and uniting all members of the party, bringing back all those who are aggrieved and building the organs of the party in the zone.'

The Minister of State for Defence, Erelu Olusola Obada, said, 'We in the South-West are eager to take back power. We know now what it means to be in and out of power. I can assure you that we are ready. In the course of this journey, it is very important that we forgive one another. We women are going to show the men that we are together.'