POPE FRANCIS NOT A KIDNAPPER - VATICAN 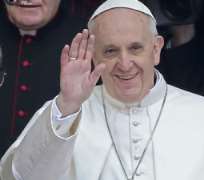 Pope Francis I
The Vatican on Friday dismissed claims that Pope Francis played a direct role in the kidnap of two Jesuit priests during Argentina's murderous military dictatorship.

The Vatican said in a statement by its spokesman, Jesuit Father Federico Lombardi, that the allegation was part of a campaign by 'left-wing anti-clerical elements to attack the church,' the Catholic News Service reports.

Lombardi read a statement to journalists in response to renewed allegations that the future pope failed to protect two young Jesuit priests - Fathers Orlando Yorio and Francisco Jalics - from kidnapping by Argentina's military junta in 1976.

'This was never a concrete or credible accusation in his regard. He was questioned by an Argentine court as someone aware of the situation but never as a defendant. He has, in documented form, denied any accusations.

'Instead, there have been many declarations demonstrating how much (the future Pope Francis) did to protect many persons at the time of the military dictatorship,' the spokesman said.

Lombardi also drew attention to recent statements by a leading Argentine human rights activist that the pope 'was not directly complicit' with the regime.

'He did not have ties with the dictatorship,' said the statement from Adolfo Perez Esquivel, who won the 1980 Nobel Peace Prize for his work on human rights during Argentina's 'dirty war' from 1976 to 1983.

'But the activist added that the future pope had 'lacked the courage to stand with us in our struggle for human rights.'

The Vatican spokesman called the statement a 'declaration to be given much attention, because Perez Esquivel is not traditionally favourable to the church.'

Then-Father Jorge Mario Bergoglio, the future pope, was head of the Jesuit province in the country from 1973 to 1979, the height of the clandestine war that saw as many as 30,000 Argentines kidnapped, tortured, murder or disappeared, never to be seen again.

Horacio Verbitsky, author of 'El Silencio,' a book about the church's role in the country at the time, claims that Cardinal Bergoglio did not endorse the work of the two priests in question, providing a tacit go-ahead for the military to abduct them.

Military officials held and tortured the men before eventually releasing them.

Speaking at the Vatican, Lombardi also referred to a news report that one of the two priests, now living in Germany, had said that he and the other kidnap victim had eventually reconciled with the future Pope Francis.

'The campaign against Bergoglio is well-known and dates back to many years ago. The accusations pertain to a use of historical-sociological analysis of the dictatorship period made years ago by left-wing anti-clerical elements to attack the church. They must be firmly rejected,' Lombardi said.

The Vatican spokesman said that the future pope, in his years as a bishop, was involved in publicly asking forgiveness on behalf of the church in Argentina 'for not having done enough at the time of the dictatorship.'

Bergoglio twice refused to testify on the kidnapping incident before taking the stand in 2010. Prosecutors said his testimony failed to answer the allegations.

In an authorised biography, written by Argentine journalist Sergio Rubin, then-Cardinal Bergoglio said he had advised the priests to stop their work.

'I warned them to be very careful,' he said in excerpts quoted by the Associated Press. 'They were too exposed to the paranoia of the witch hunt. Because they stayed in the barrio, Yorio and Jalics were kidnapped.'