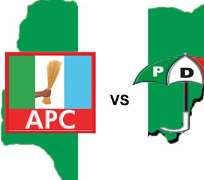 The recent formation of the All Progressive Congress (APC) from four strong opposition parties in the country- ACN, APGA, ANPP and CPC may be the last opportunity to head off a one party system. The ruling PDP should not try to scuttle the merger as politically alleged in some notable quarters. If this democracy must be sustained, there should exist at least two strong parties with near-equal chances of forming a government after each election. Even the recent confliction of registration of African Progressive Congress (APC) which Independent National Electoral Commission (INEC) under the leadership of Prof. Attahiru Jega has stopped the registration of the first APC claiming that the two names cannot be registered which some alleged that some powerful cabals of the ruling party which was widely published by the national newspapers in Nigeria were behind the evil plot to stop the first APC.

Since 1999 when Nigeria returned from Military regime to civilian democracy, PDP has been occupying Aso Rock without any strong opposition party winning the four general elections in the country. Though some PDP highly placed chieftains have politically declared time without numbers that there is no political vacancy in the Aso Rock that PDP would continue to rule for 100 years as democracy continues to exist in Nigeria. Not long ago when INEC cut down some political parties in Nigeria that could not win any political offices some but only existing in the chronicles of the political system. But in the recent elections ACN has equally captured the South West and Edo State, CPC and ANPP for the North, APGA for two Eastern States, LP for one South West State and DPP for Delta State occupies some imperative positions in the State and National Assemblies in Nigeria. The subject of do or die affairs was originated from the PDP that equally made opposition parties look unprepared and and unwary in the Nigeria’s political structure. The fear of PDP dominating the entire political process is the beginning of total political failure in Nigeria.

However, it is known that PDP has continued to manipulate the entire electoral process; its leaders have sworn to win at all cost or considered elections as semi- gods that has equally brought irreparable loss of lives and property through the highly wicked fundamentalists called ‘Boko Haram’ and other social vices in the country. The problem with the newly emerged political party is the ability to choose the rightful candidate for 2015 general elections that can wrestle power from the PDP. Although, the so-called ACN, CPC, APGA and ANPP, are not different from the ruling political party in terms of political cabalism and manipulation of candidates and regional politics that has digitally crept into the system. The alleged issue of President Goodluck Jonathan signing a pact with the PDP that he would only ruled for a single term has continued to raise political grime in the sense that his government must end in 2015 without reservations. The splitting of Governors Forum into PDP Governors Forum indicated the political inequality in the country. Apart from having South East Governors Forum, Northern Governors Forum and others are all singing the same songs of leadership of the country and nothing else. But knowing well that Nigeria is running a flawed political process that makes politicians not to have a stand in their political statements.

The Governor of Niger State, Babangida Aliyu alleged that President Jonathan signed pact with the North not to run for second term whereas the 1999 amended constitution allows a person to run for two terms in office and nothing else .The body language of Mr. President reads that he might contest for second term in in spite of strong opposition parties in Nigeria. The likes of Dr. Reuben Abati and Dr. Doyen Okupe have equally prepared for paid social critics who never see Jonathan’s administration as nothing but mere total failure. Though the era of conscripting unreliable and unpopular candidates on Nigerians are over. Nigeria is gradually heading towards two- party system in 2015.

Again the APC merger talks could be betrayed by some voracious leaders who are only interested in making wide noise without adequate preparation to unseat the almighty ruling political party who are politically claiming to be the largest political party in Africa. At least PDP occupies 26 states out of 36 states including the Federal Capital City (FCT) Abuja and two-third of the National Assembly occupies by the PDP.Between 2007 and 2011, many political leaders have defected from one political party to another in the sense of pursuing their political ambitions, but some parties stem a tide of some political leaders not to leave their parties like that without due process. PDP has tried to capture some states within a short period of time, but no avail because of the ACN factor and others. PDP has all what it takes to win the electoral umpire if APC allows it.

The recent state pardon by the executive council meeting chaired by President Jonathan to free some prominent Nigerians which have elicited great criticisms from all quarters indicated the constitutional rights which he exercised to make the country as one entity. Though the apex leadership of the country belongs to the PDP but APC can still capture the electoral process if all hands are put on deck to secure victory in 2015.One of the problems that would scuttle the so-called APC is the ability to bring a desirable candidate for the presidential candidate that would wrestle powers from the PDP or Jonathan. It is obvious that PDP has the powers to manipulate the entire political process and ready to make all available mechanisms, strategies and tactics to mar the electoral process as the case may be. Poverty is the bedrock of corruption in the country.

Lastly, APC unity is susceptible in some quarters while inferiority complex might prevent the victory of the opposition parties if not putting their houses together before 2015. Over the years, political parties alliance have not hold waters in terms of political collaboration and only dies at the first beginning of its electoral process. The fact remains that new party harbors yesterday’s men who are not likely to work together. Obviously, detractors will infiltrate the new party to cause mystification and ensure that the merger does not last. Is the APC awake? Most of the new APC members where once ANPP. AD and PDP members who intended to belong to a political party that has formidable structure for the electorates.

PDP has equally thrown its challenge to the APC that only valid political cooperation and not media hype would make them occupy Aso Rock in 2015. Only time would tell if APC is ready to capture power from the PDP in 2015. APC must start preparing assiduously for 2015 general elections than using the print and electronic media to run down the present government.