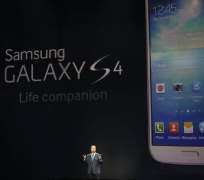 Samsung Electronics Co premiered its latest flagship phone, the Galaxy S4, which sports a bigger display and unconventional features such as gesture controls, as the South Korean titan challenges Apple Inc on its home turf.

The phone, the first in the highly successful Galaxy S-series to make its global debut on U.S. soil, was unwrapped at Manhattan's iconic Radio City Music Hall on Thursday evening. Some industry watchers were clearly dazzled by its features, setting a high bar for Apple to surpass.

The S4 can stop and start videos depending on whether someone is looking at the screen, flip between songs and photos at the wave of a hand, and record sound to run alongside snapped still pictures. But other industry watchers said the phone would not upturn an industry that lives and dies by innovation.

The plethora of new features "are good steps in this direction, but they can be seen as gimmicks rather than game changers. At this point, Samsung appears to be trying to kill the competition with sheer volume of new features," said Jan Dawson, chief telecom analyst at IT research outfit Ovum.

"For now, Samsung can likely rely on its vastly superior marketing budget and the relatively weak efforts of its competitors in software to keep it ahead."

The success or failure of Samsung's latest flagship phone - the fourth in a brand launched in 2010 - will be pivotal in the world's biggest smartphone maker's battle against Apple and smaller, and key to that struggle will be phone differentiation.

Apple may already be feeling the heat.
Just a day before, marketing chief Phil Schiller blasted Samsung and the Google Android software in rare interviews given to Reuters and other select media, underscoring the pressure that the iPhone maker is feeling from its Korean mobile-phone nemesis.

The S4, which Samsung preceded with a marketing blitz that drummed up industry speculation reminiscent of some of Apple's past launches, will be available by the end of April and rolled out to 327 carriers in 155 countries, including U.S. service providers Verizon Wireless, AT&T Inc, Sprint Nextel, T-Mobile USA.

"Samsung has fulfilled the promise of their marketing that they are the tech innovators. It remains to be seen whether it's overload for customers, whether they can really take advantage of all these features," said Forrester analyst Charles Golvin.

The S4 will use either Samsung's own applications processor or Qualcomm Inc's Snapdragon central processing chip, depending on the country. But the Korean company kept mum on exact dates and prices.

SAMSUNG HITS BROADWAY
Samsung took a slightly different tack with the S4's launch, using actors and a full live orchestra to present the smartphone's various features via a series of skits - as perhaps befitted its theatrical platform.

That marked a departure of sorts from the usual slick, high-wattage shows favored by rivals such as Apple.

Investors largely shrugged off the launch. Shares in Samsung were down 1.1 percent in a steady market in early Seoul trading on Friday.

The stock has stood little changed so far this year, while Apple's shares have tumbled 20 percent as disappointing sales of iPhones raised fears that its dominance may be slipping.

Apple's U.S. sales outstripped Samsung's for the first time in the quarter ending in December, even after Samsung spent a record $400 million on phone advertisements here last year.

While the global smartphone market's growth rate is tapering off, Samsung still derives the majority of its annual profits from Galaxy phones.

Samsung said the Galaxy S4 will sport a bigger 5-inch display than the S3's 4.8 inches. But because the new display will cover more of the phone's surface area, the device itself will be the same length and slightly narrower, thinner and lighter than the previous generation.

The newest features involve different options for navigation. For example, if the phone senses someone is looking at the screen, the user can tilt it forward or backwards to scroll up and down a Web page.

That feature falls slightly short of what some consumers may have expected after the New York Times reported that the phone would be able to scroll automatically by tracking readers' eyes.

But what it can do is sense when it has someone's attention. When a video is playing, for instance, the stream will automatically pause if the person glances away and it will restart when the eyes refocus on the screen.

This is an update on an existing Galaxy feature, which powers down the display if it senses no one's looking at it, conserving battery power.

The latest phone also has a sensor that lets users move their hands to the left or right to scroll between different websites they have opened or through songs or photos in an album without having to touch the phone.

The idea is to make it easier to change the song playing without having to pick up the phone while driving or to avoid putting sticky fingers on the touch-screen display while scrolling through a Web page at mealtimes.

The phone will also allow users to hover a finger over an email inbox or a photo gallery to get a glimpse of more details of what's in the email or which photos are in an album.

Another feature includes the option to automatically put a copy of details from a photograph of a business card into the phone's contacts database or call a number in the business card.

"They kind of cherry-picked features that other competitors had, and then packed them up all together into one device," said Gartner analyst Carolina Milanesi.

"The story though is more about who Samsung is and where they want to be. It is clear today that they want to play in an ecosystem game, their own ecosystem. The word Android didn't come up once."