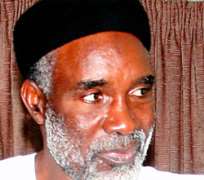 By Emmanuel Aziken, Political Editor
'WHAT affects one of us affects every other governor,' one of the antagonists in the feud among the governors belonging to the Peoples Democratic Party, PDP told Vanguard weeks before the feud came to a climax. It is as such not surprising that given the increasing divide among the governors in their attitude towards the presidency, that virtually all of them are agreed on supporting their embattled colleague in Adamawa State, Admiral Murtala Nyako.

The chairman of the newly formed PDP-Governors Forum, Chief Godswill Akpabio, in his first declarations after the first meeting of the forum last month had ruled that the Umar Kaugama led executive of the PDP inclined to Gov Nyako should be sustained, at least for some time.

'The PDP Governors Forum also looked into the issue of Adamawa State PDP and came to the conclusion that they should allow Governor Sule Lamido's committee to do its work to report immediately to the party, the NWC and the Presidency. But in the meantime, we plead that the status quo should be allowed to remain. By the status quo we mean the Kaugama Mijinjwa Committee, the executive in place prior to the dissolution of the state executive', he added.

Remarkably, the sustenance of the Kaugama executive had been one of the underlining issues that led to the battle of wits between the chairman of the Nigerian Governors Forum, NGF, Rotimi Amaechi and partisans aligned to the national chairman of the PDP, Alhaji Bamanga Tukur and presidency officials.

The Adamawa political conflict exacerbated in 2006 when the then leadership of the PDP in Abuja, conceived the idea of linkmen, who were used to displace existing structures of the party that they were not disposed to. In Adamawa State where former Vice-President Atiku Abubakar together with the then governor, Mr Boni Haruna were in control, a new structure built around Senator Jibril Aminu was brought up to displace Atiku and his men who eventually found their way to the then Action Congress.

Gov. Nyako
In Adamawa State the tide saw many members of the party executive then under the chairmanship of Mr. Joel Madaki transformed into the leadership of the Action Congress in the state. One of the few that didn't go was the then deputy, Umar Kaugama. With Atiku out of the party, Senator Aminu was able to build a new PDP mostly around some retired military men and acolytes of his.

The gubernatorial primary was an especially tough cracker that had frontrunners in the persons of Buba Marwa, Murtala Nyako, Adamu Dahiru Modibo, Senator Jonathan Zwingina among others. In the end, not much of a contest was done as Nyako who was before a chieftain of the All Nigeria Peoples Party, ANPP emerged as the candidate. Nyako was favoured not just because Aminu wanted him, but according to some, because of his own personal relationship with President Olusegun Obasanjo, under whom Nyako had served as a military officer. Nyako had gone further to establish a personal relationship with Obasanjo through a mutual love for farming.

Marwa was especially under pressure. After putting much of his own logistics available, including providing his Albarka Airlines to ferry the team to Yola, he lost out and was almost denied an ambassadorship in the intrigues that followed. But following the gubernatorial election, Nyako came to himself and subsequently displaced Aminu and even stopped his one time political benefactor from returning to the senate in 2011.

Nyako's complete control is now the substance of the battle of wits between him and many of the party's pioneering leaders who have put aside their past political differences to fight the man on the throne. It is a rainbow coalition that surprisingly puts Aminu, Atiku, Tukur, Marwa, Zwingina and many others who have been on the receiving end from one another now engaged in fighting a common enemy.

Remarkably, they have found as their linchpin, Tukur who by circumstance of fate was made national chairman leading the battle. Crucial to the case of the anti-Nyako elements is their assertion that the state chairman of the party, Kugama is from the same ward as the governor, a point that they have canvassed to underline what they claim is the governor's indifference to other stakeholders.

'The main problem of the Kugama Chairmanship was that Alh. Kugama and Admiral Nyako came from the same ward; which is in violation of the principle of Federal character as well as Zoning adopted by our Party. All attempts by various Stakeholders in the State, by the National Headquarters of our Party and even by INEC to replace Alh. Kugama as Chairman through consensus or a Party Congress, were resisted by Governor Nyako,' the anti-Nyako stakeholders deposed in a summary to the Governor Sule Lamido ad-hoc committee now probing the issue.

The Kugama that is now the issue, remarkably, was at one time with Senator Aminu and had served as deputy chairman to Madaki who was state chairman all through the Haruna years. When Atiku, Haruna and others left, he remained and succeeded as state chairman of the party in 2006 and is today arguably, the longest serving PDP state chairman. His critics are also pushing for his exit on the grounds that he was not elected through a regular congress.

Rescinding its decision
By September last year the stakeholders obviously using the leverage from Tukur were able to push through a resolution of the National Working Committee, NWC of the PDP for the dissolution of the Kugama executive. It was an action that brought out the steel of the governor and his fellow governors who mobilized themselves against the NWC forcing the NWC to rescind its decision last January.

However, by the time the reversal was done, the caretaker committee that was put in place in concert with operatives from the national secretariat had concluded plans for state congresses for a new executive. At the end of the congresses, Mr. Madaki like a cat with nine lives, was returned as the state chairman and was recognized by Tukur as the state chairman during the latter's homecoming last February. So, in effect, the PDP in Adamawa is now fractured in two with two determined forces desperate to consume one another.

But how Nyako, an outsider at one time came to take over the party from those that were considered themselves as the owners of the party is an issue that underlines the grit and grasp of military politics with which some of Nigeria's former soldiers are now known for.