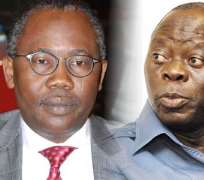 ...Govs, ministers, others stunned at council of state meeting

STILL smarting from the murder of his aide, Edo State Governor Adams Oshiomhole did not mind that he was at a hallowed meeting with the nation’s top leaders.

The governor broke into a hot exchange of words with the Attorney-General and Minister of Justice, Mohammed Adoke, at the meeting of the National Council of State, Nigeria’s highest advisory body comprising the President, Vice President, Senate President, Speaker of House of Representatives, 36 governors, former Heads of State and Presidents and serving and former Chief Justices of the Federation.

The thorny issue between the Edo State governor and Adoke was the manner the Federal Government handled the investigation into the murder of Private Secretary to Oshiomhole, Mr. Olaitan Oyerinde.

The incident between Oshiomhole and Adoke started during the pre-meeting interactions when the Attorney-General and Minister of Justice left his seat and moved to meet Oshiomhole. An open argument then ensued between them over the handling of Oyerinde’s death. The feistiness of the altercations almost degenerated into fisticuffs. But the quick intervention by Governor of Delta State, Dr. Emmanuel Uduaghan, Chief of Staff to the President, Mike Oghiadomhe and the President’s Speech Writer, Matts Aikhionbare, saved the day.

After the meeting, Oshiomhole initially refused to speak to journalists about the incident, but later spoke up when he was told it was already an open issue.

Continuing his tirade against Adoke, he berated the Attorney- General and Minister of Justice over the investigation into Oyerinde’s murder.

He stated that the result of the investigation was wrongfully referred to the office of the Attorney-General of the Federation and Minister of Justice by the Deputy Inspector-General of Police (DIG) instead of the State’s Attorney-General and Commissioner for Justice.

According to Oshiomhole: “I don’t think it is an issue I want to talk about. The issue is that he was saying my attorney-general should have known what to do; that he has nothing to do with the matter. And I simply asked him who referred the matter to him. Was it my attorney-general? The matter was referred to him by the Deputy Inspector-General of Police and I asked him who should know better? If the Deputy Inspector-General of Police (DIG) referred a matter to the Minister of Justice that he ought to have referred to the state, who is the one dragging him into the matter? Who is the one politicising the matter?

“Should we assume that the DIG did not know that the offence of murder is a state offence? And if he knows it’s a state offence, why did he refer it to the Federal Attorney-General? He should complain to the DIG who referred the case to him. The rest you witnessed. The point is that some of these guys, I am a governor, I am elected. He has to respect my office even if he doesn’t respect my person. In any event, we are dealing with factual issues. If a case was wrongfully referred to the Federal Attorney-General by the Nigeria Police, who is to blame?”

Continuing, Oshiomhole stated: “It is like the case of a he- goat. When the family is happy, they sacrifice the he-goat to celebrate. When the child is sick, the native doctor says sacrifice he-goat so that the child will be well. So, head or tail, the he-goat is in trouble. Here I am and my private secretary is killed. Nobody seems to bother. Am doing my best to raise the issue because that is the least I owe to someone who gave his life. And someone else does not think life is important. For him, it is a matter to trivialise and joke about. When it comes to death, I don’t joke. You don’t joke with life and death. The essence of governance is to protect life and property. That is fundamental. Even in poverty, people need to feel safe and secure. Nobody has a right under our constitution to take life of another, except if it has been confirmed by a court of competent jurisdiction. I was surprised that for the attorney-general, it is something he can afford to joke with, telling me that my attorney-general didn’t know what to do.”

Accosted later in the day by journalists to speak, Adoke hesitated until he was told that Oshiomhole had earlier spoken to the media on the issue.

Adoke said: “I will not disregard his (Oshiomhole) office. He is my personal friend. I have the highest respect for him. He is a governor of this country. But I will not join issues with him. I did not trivialise his office and I have no reason to trivialise his office. He is at liberty as a governor in this country to say whatever he wants to say. But I will accord his office the highest respect. And I will not join issues with him.”

Oshiomhole also spoke to journalists on the ongoing plans by opposition political parties to merge under the aegis of the All Progressives Congress (APC).

He said: “We have merged to form APC, All Progressives Congress; so, if people choose to trivialise it, it is up to them. I know that INEC will register APC because if they don’t, they leave themselves open to accusation. Everybody knows that this has been in the national discourse over the period. It is not a new issue. And if people want to play these cheap games, first, it shows that they are panicky. And I don’t see any reason why people should be panicky over the alliance. In a genuine democracy, it is in our interest; those in power and those out of power, to create viable alternative platforms for people to make an informed choice. No party is too good to rule forever nor is any party too bad to be out of power forever. We have seen what is happening around the African continent. Nigeria must live by example in many respects. And if for some people, these are things to trivialise, it is not about me. It is not about you. Party is not indigeneship. It is a platform of ideas. It is about Nigeria.”