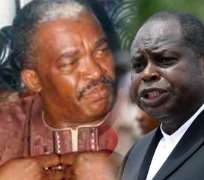 THEWILL’s authoritative source who was privy to the deliberations at the meeting held inside the Presidential Villa Abuja, said the council also approved pardons for General Abdulkareem Adisa, Colonel Segun Fadipe and Major Bello Magaji, all deceased officers who were convicted alongside Diya, for plotting to topple the General Sani Abacha led government.

What is however disturbing and worrisome is the secrecy and intrigues surrounding the pardon, as the Presidency is yet to issue a statement on the matter.

The phones of Presidential spokesman, Dr. Reuben Abati has been unreachable all day while Adamawa State Governor, Murtala Nyako, who briefed some reporters in Hausa denied that anyone was granted pardon.

The meeting, which was chaired by President Goodluck Jonathan, was attended by three former Heads of State – General Yakubu Gowon, Alhaji Shehu Shagari and Chief Ernest Shonekan and some state governors.