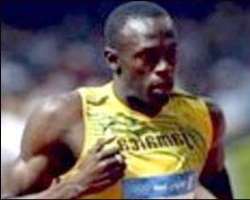 Olympic and world 100m and 200m champion, Usain Bolt will make his 2010 track comeback over 400m in Jamaica on Saturday February 13.

The 23-year-old world record holder usually starts his season over the longer distance to ease himself from training into racing.

Bolt's last run was in winning the 200m in September's IAAF finals in Greece.

He has also confirmed he will compete over 100m in the Diamond League meeting in New York on 12th June.

It will be Bolt's first competition in the United States since he set his first world record at the same meeting in 2008.

However it has still to be revealed whether the race will be his first of seven Diamond League appearances.

The inaugural Diamond League circuit begins in Doha on 14th May and before New York there are three other meetings in Shanghai (23th May), Oslo (4th June) and Rome (10th June).

"New York was the site of my first world record, the track is lightning fast and the fans, well, they sat through an entire thunderstorm in 2008 just to watch the 100m so I know they appreciate speed," said Bolt. "I am looking forward to returning to the Big Apple in June."