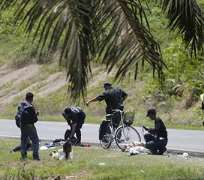 Malaysian security forces found 13 bodies of suspected Philippine militants as they expanded their hunt for an elusive armed group on the island of Borneo on Wednesday, a day after an assault with fighter jets, mortars and hundreds of troops.

The nearly month-long confrontation in Sabah state, in Malaysia's part of Borneo, was sparked when the armed group of about 200 sailed from the nearby southern Philippines to press an ancient claim to the resource-rich region.

"The total is 13. There could be more," Malaysian Defence Minister Zahid Hamidi told reporters at a media center set up at the palm oil plantation of Felda Sahabat.

It was unclear if the bodies found on Wednesday had been killed in Tuesday's massive assault or included some of the 19 militants that Malaysian officials said had been killed over the weekend. At least 27 people, including eight Malaysian policemen, have been killed since Friday's first clash.

Zahid, who produced what he described as pictures of some of the dead militants, said Malaysian forces had suffered no fresh casualties since the assault was launched on Tuesday.

Malaysian police warned residents to be on alert for members of the group who had escaped into plantations that dominate the coastal area and who could be posing as farmers.

Security forces clashed with suspected militants in three separate locations on Wednesday, state news agency Bernama said, with one gunman shot and believed to be dead.

"The mopping and searching will cover a wider area given there are signs the intruders moved to another location," police inspector-general Ismail Omar told reporters.

"The security forces are tracking down their movements and will take the appropriate action."

FIGHTERS WILL NOT RETURN HOME: SPOKESMAN
Allies of the group in Manila said they had been in telephone contact with Raja Muda Agbimuddin Kiram, the militants' leader and the brother of the self-proclaimed sultan, who said the group had split up to avoid detection.

Abraham Idjirani, a spokesman for the group, told Reuters that 10 of the sultan's followers had died in total, with 10 captured and four wounded.

"They will not come home and would rather die fighting if cornered," he said of the remaining followers in Sabah.

The family in Manila also said more followers had arrived to reinforce the group, a journey between the Southeast Asian neighbors that takes around an hour by speedboat.

Army trucks carrying dozens of soldiers continued to enter the village of Kampung Tanduo where the group had originally been holed up. A helicopter hovered overhead.

Fighter jets bombed the group's camp in the Felda Sahabat plantation early on Tuesday after Malaysian Prime Minister Najib Razak said his patience had run out. Philippine officials had urged the group to return home.

The group says it represents the now defunct sultanate of Sulu in the southern Philippines and demands recognition and payment from Malaysia due to their claim to be rightful owners of Sabah.

The security headache has strained ties between the Philippines and Malaysia and could prompt Najib to delay an election that must be held by June, adding to nervousness among investors over what could be the country's closest ever polls.

The insecurity has disrupted operations in Sabah's huge palm oil industry. Prolonged trouble could dampen growing investor interest in energy and infrastructure projects in the state, although the main oil fields are far from the standoff.