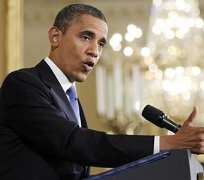 President Barack Obama raised anew the issue of cutting entitlements such as Medicare and Social Security as a way out of damaging budget cuts, a White House official said on Sunday, as both sides in Washington tried to limit a fiscal crisis that may soon hit millions of Americans.

Signaling he might be ready to explore a compromise to end automatic spending cuts that began late Friday, Obama mentioned reforming these entitlement programs in calls with lawmakers from both parties on Saturday afternoon.

"He's reaching out to Democrats who understand we have to make serious progress on long-term entitlement reform and Republicans who realize that if we had that type of entitlement reform, they'd be willing to have tax reform that raises revenues to lower the deficit," White House senior economic official Gene Sperling said on Sunday on the CNN program "State of the Union."

Republicans have long argued that the only way to tame budget deficits over the long haul is by slowing the cost of sprawling social safety net programs.

These include the Social Security retirement program and Medicare and Medicaid healthcare programs for the elderly, disabled and poor that are becoming more expensive as a large segment of the U.S. population hits retirement age.

While Obama also has proposed some savings on these programs, he has insisted that significant new tax revenues be part of the deficit-reduction formula, an idea Republicans so far reject.

Budget fights in Congress took their most serious turn in years on Friday when $85 billion in indiscriminate spending cuts known as "sequestration" began to kick in after both parties failed to agree on how to stop them.

Democrats predict the automatic cuts could soon cause air-traffic delays, meat shortages as food safety inspections slow down, and hundreds of thousands of furloughs for federal workers.

As the budget battles rage on in Washington, sources said Obama plans to nominate on Monday Sylvia Mathews Burwell to head to White House Office of Management and Budget. A veteran of the Bill Clinton White House, Burwell is president of the Walmart Foundation, which handles the corporation's charitable efforts.

Neither Sperling nor White House spokesmen would provide further details on Obama's conversations on Saturday with members of Congress, and they did not identify the lawmakers to whom the president spoke.

Obama's mention of entitlement reform may help bring Republicans to the table to halt the cuts. Republican leaders also made soothing noises on Sunday about the need to avoid a government shutdown on March 27, when funding runs out for most federal programs.

BOEHNER'S MAXIMUM EFFORT
House of Representatives Speaker John Boehner, interviewed on NBC's "Meet the Press," said he "absolutely" would do whatever it takes to keep the government operating. Toward that end, he will seek House passage this week of a "continuing resolution" to fund the government through September 30, when the fiscal year ends.

Lately, some rank-and-file Democrats and Republicans have been sending signals that they are willing to compromise to end a two-year-old deadlock over tax and entitlement reforms.

A few days later, liberal Democratic Senator Ben Cardin of Maryland told Reuters that he had discussed with Senate Democratic leader Harry Reid the possibility of replacing the automatic spending cuts with a mix of entitlement reforms and tax increases.

"Democrats know we have to do entitlement reforms and Republicans know they have to do revenues (increases)," Cardin said.

Now that they are in place, the $85 billion in spending cuts must be carried out by September 30 if no alternative is found. Half of those cuts would hit the military with the rest scattered over thousands of other domestic programs.

Economists have warned that such a heavy dose of belt tightening over such a short period will slow U.S. economic growth and potentially cost 750,000 jobs.

Speaking of the search for alternatives, Boehner said on "Meet the Press:" "I don't think anyone quite understands how it gets resolved."

No matter how Obama and Congress resolve the 2013 battle, this round of automatic spending cuts is only one of a decade's worth of annual cuts totaling $1.2 trillion mandated by the sequestration law.

Slamming the door on Democrats' demands for new tax hikes, Boehner said that Obama "got $650 billion of higher taxes on the American people on January the first. How much more does he want?" He was referring to the higher tax rate that began in the new year on households making more than $450,000 a year.

"It's time for the president and Senate Democrats to get serious about the long-term spending problem that we have," Boehner said.

In the meantime, both Democrats and Republicans were hoping to win the immediate fight over the automatic spending cuts so that they are best positioned in any upcoming battles over long-term budget deficits.

Senate Republican leader Mitch McConnell on Sunday played down the severity of the automatic cuts, describing them as modest.

"We're willing to talk to him (Obama) about reconfiguring the same amount of spending reduction over the next six months," McConnell said on CNN. "The American people look at this and say: 'Gee, I've had to cut my budget more than this,' - probably on numerous occasions over the last four years because we've had such a tepid economy now for four long years."

At the heart of Washington's persistent fiscal crises is disagreement over how to slash the budget deficit and gain control of the $16.7 trillion national debt, bloated over the years by wars in Iraq and Afghanistan and government stimulus for the ailing economy.

Government red ink also rose over the last decade after the enactment of across-the-board tax cuts in 2001 and 2003 secured by President George W. Bush.