GENDER EQUALITY IS ESSENTIAL ACROSS ALL MDGS 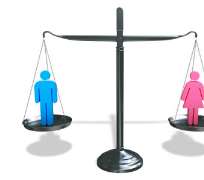 A national level consultation on "Reducing Gender Inequalities: A Possible Framework for Post 2015" was recently held at Nawabganj, Unnao. Organized by the National Mission for Empowerment of Women (NMEW), Government of India, and supported by the UN Women South Asia, it was hosted by the Centre for Advocacy and Research and brought together leading civil society groups, think tank bodies and academicians to deliberate on the strengths and weakness of the Millennium Development Goals (MDGs); to review gaps and suggest remedies and evolve an inclusive, participatory and sustainable framework to advance the MDG post 2015.

One of the delegates Yamini Mishra from UN Women South Asia said to Citizen News Service – CNS that “promoting gender equality and women empowerment is one of the Millennium Development goals where three measures on gender equality are mentioned. First is the ratio of girls in primary education, second is the percentage of women’s share wage employment and the third is percentage of women members in the Parliament. The Indian Government is saying that the gender parity in primary education has been achieved but then what about wage employment where we are not meeting the target and in Parliament there are only 11% women?”.

Rashmi Singh, Executive Director, NMEW expressed her concern that, “MDGs goals are aspirational and have been critiqued for various reasons and more specifically for not succeeding in integrating gender across the seven other MDGs. To bridge this gap is a huge challenge. In order to achieve gender equality and empowerment as enunciated in Goal 3 of the MDGs, we need to adopt an integrated approach to gender equality and that will materialize only if we make gender a cross-cutting goal across all MDG indicators. This consultation seeks to address the gaps and lacunae by locating the Post 2015 effort in strengthening the focus and accountability towards the poorest of the poor including Dalits, Tribal, Muslim and women from marginal communities. Bringing the voices of the voiceless to the main stream and in the planning process should start right now.”

According to Anne F Stenhammer, UN Women South Asia Representative, “When it comes to women’s empowerment, discrimination and inequalities harm them more severely -be it in the social, legal or cultural spheres. Gender-based discrimination, and the denial of the rights of women and girls, remains the single most widespread driver of inequalities in today’s world. Gender-based violence, taking many forms, is a major element of this massive and continuing failure of human rights. Translating equality and the other fundamental values of the Millennium Declaration more systematically and effectively into the Post 2015 Agenda will be crucial to sustaining progress and improving the wellbeing of both today’s and all future generations to come.”

Jashodhara Dasgupta from Sahayog, Lucknow lamented that, “So far India, has not been able to meet many of the targets set under the MDGs. India’s achievement list boasts of being on track only for 2 targets of the 8 mentioned under the MDG. India with a 98.3% net enrolment at the primary level in 2009-10, will most likely meet the target of ensuring that all children complete a full course in primary education. There are strong hopes that in terms of poverty reduction too, with a declining rate from 37% in 2004 to 29.8% in 2009-10, the targets will be met but with a rider if accelerated actions are taken.

Dasgupta pointed out that malnutrition, infant mortality, malaria are critical health concerns where the country still needs to scale up its attention. With 40% of Indian children being underweight in 2006, the hunger related indicator will probably not be met. The target of significant reduction in infant and maternal mortality is also likely to be missed.”