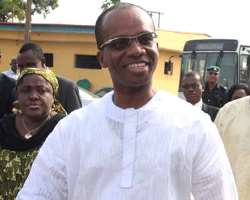 SAN FRANCISCO, February 28, (THEWILL) – The Economic and Financial Crimes Commission, EFCC, Thursday, told a Lagos State High Court sitting in Ikeja, that the former managing director of the defunct FinBank Plc, Okey Nwosu and three of his former directors standing trial for an alleged N20 billion scam used the bank’s depositors’ funds to purchase shares without the consent of the board of directors of the bank. The other directors are Dayo Famoroti, Danjuma Ocholi and Agnes Ebubedike,

EFCC’s witness, Mr. Usman Zakari told the court that the shares were purchased using seven different company names which, according to him, were neither incorporated by the bank nor authorized to carry out the transactions.

EFCC counsel, Mr. Rotimi Jacobs, SAN, also presented a documented proof of the board’s resolution on the said shares’ acquisition. The document did not contain any approval for the purchase of the shares.

Counsel to the first defendant, Nnamdi Oragwu objected to the admittance of the document as an exhibit before the court.

According to him "the defence is surprised at this document and is seeing it for the first time". Counsel to the third defendant, Kunle Ogunlesi, SAN also argued that the author of the document should have been in court to tender the document and not the witness. While counsels to the second and fourth defendants; Seyi Sowemimo, SAN, and I. A. Adedipe, SAN respectively, aligned with the submissions of Oragwu and Ogunlesi. They all prayed the court to discountenance the document.

Justice Okunnu, however, overruled the defence counsel and asked them to proceed with the cross examination of the witness. She also admitted the document as an exhibit.