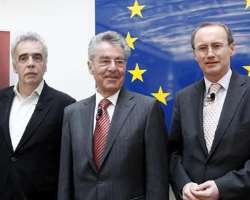 Bankers in Europe face a cap on bonuses as early as next year, following agreement in Brussels on Thursday to introduce what would be the world's strictest pay curbs, in a move politicians hope will address public anger at financial-sector greed.

The provisional agreement, announced by diplomats and officials after late-night talks between EU country representatives and the bloc's parliament, means bankers face an automatic bonus cap set at a par with their salaries.

That can be raised to twice their pay packet only if a majority of the bank's shareholders vote in favor.

The rules will apply to all banks - American, Asian, Russian or European - based in Europe, and to units of European banks located abroad, so a Deutsche Bank employee working in New York or Tokyo would be subject to the same limits.

Equally, a Goldman Sachs banker in London, Frankfurt or anywhere else in the European Union would be covered.

The cap has been somewhat softened by provisions for adjusting the value of long-term non-cash payments to bankers, so that more bonuses can be paid out over time without breaking through the new ceiling.

The limit on bankers' pay, which is set to enter EU law as part of a wider overhaul of capital rules aimed at making banks more stable, will be popular on a continent struggling to emerge from the ruins of the 2008 financial crisis.

But it represents a setback for the British government, which had long argued against such absolute limits. The City of London, the region's financial capital with 144,000 banking staff and many more in related jobs, will be hit hardest.

"The United Kingdom is not happy," said one lawmaker, speaking privately.

Ireland, which holds the rotating EU presidency and helped negotiate the deal, will now present it to EU countries. Irish Finance Minister Michael Noonan said he would ask his peers to back it at an EU ministers' meeting on March 5 in Brussels.

The backing of a majority of EU states is needed for the deal to be finalized, so Britain would not be able to block it alone. One member of the European Parliament privately signaled that the deal could yet change, pointing to the "reservations" of some EU countries.

Other measures in the package, including moves to force banks to declare all core assets, remain unresolved. Thursday's agreement will also require banks to outline profits and other details of their operations on a country-by-country basis, and they face a 2019 deadline to raise their core capital levels.

The change in the law is set to be introduced as part of a wider body of legislation, known as Basel III, which demands that banks set aside roughly three times more capital and build up cash buffers to cover the risk of unpaid loans.

Some experts have criticized the EU for failing to stick to all the provisions set out in the Basel III agreement, which was drawn up by regulators after the financial crash.

ANTI-EU HOSTILITY
A ceiling on bonuses, the only one of its kind globally, is perhaps the most radical aspect of the new rules, and runs the risk of establishing an uneven global playing field that could put European banks at a disadvantage in attracting staff.

Udo Bullmann, a German member of parliament involved in the negotiations, said the deal was "revolution in a sector that didn't have rules any more".

But many think the reforms will do little to lower pay in finance, where headhunters say some annual packages in London approach 5 million pounds ($7.6 million).

"If the cap is implemented, it could result in significantly more complex pay structures within banks as they try to fall outside the restrictions to remain competitive globally," said Alex Beidas, a pay specialist with the law firm Linklaters.

An earlier attempt to limit bankers' pay with an EU law forcing financiers to defer bonus payments over up to five years merely prompted lenders to increase base salaries.

But it would be harder for banks to raise base pay this time around. The bonus rules will come as part of wider legislation setting higher capital standards for banks, increasing their costs and curbing freedom to hike salaries.

Hedge funds and private equity firms will be excluded from such curbs, though they face restrictions on pay later this year under another EU law.

Nonetheless, the curbs on bankers could have a spillover effect on the nearly 700,000 people who work in financial and professional services in London.

About 27 billion pounds ($41 billion) of bonuses have been spent over the past decade on real estate in the British capital, according to data compiled for Reuters by property firm Savills.

"This could push British political opinion and opinion in the City of London several notches more hostile to the EU than it is already," said Charles Grant of the Centre for European Reform thinktank.

The restrictions planned by Brussels may be overtaken by events in an industry where slack activity has already driven down most bonuses to twice salary or lower.

A bonus cap there still looks unlikely.
"There are some in the U.S. who will think it's a good idea to do the same," said Nicolas Veron, the Peterson Institute for International Economics think tank in Washington. "But the mainstream here would say that regulating pay is going to be circumvented by the banks and will ultimately hurt the economy."