U.S. Will Give Syrian Rebels Medical, Food Aid, Not Arms 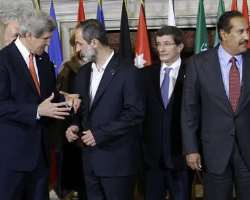 More than 70,000 Syrians have been killed in a devastating conflict that began with peaceful anti-Assad protests nearly two years ago. Some 860,000 have fled abroad and several million are displaced within the country or need humanitarian assistance.

Kerry, speaking in Rome after a meeting of the mainly Western and Arab "Friends of Syria" group said his country would more than double its aid to the Syrian civilian opposition, giving it an extra $60 million to help provide security.

The United States would now "extend food and medical supplies to the opposition, including to the Syrian opposition's Supreme Military (Council)," Kerry said.

In their final statement, the Friends of Syria pledged more political and material support to the opposition Syrian National Coalition, a fractious group that has struggled to gain traction inside Syria, especially among disparate rebel forces.

Riad Seif, a coalition leader, said on the eve of the Rome talks that it would demand "qualitative military support", though another coalition official welcomed the shift in the U.S. stance.

"We move forward with a great deal of cautious optimism," said Yasser Tabbara. "We heard today a different kind of discourse," he said, adding the opposition need military and political support.

The modest U.S. policy shift may compound the frustration that had prompted the coalition to declare last week it would boycott the Rome talks. It changed its mind under U.S. pressure.

Many in the coalition say Western reluctance to arm rebels only plays into the hands of Islamist militants now widely seen as the most effective forces in the struggle to topple Assad.

However, a European diplomat held out the prospect of possible Western military support, saying the coalition and its Western and Arab backers would meet in Istanbul next week to discuss military and humanitarian support to the rebels.

It also stopped short of providing other forms of non-lethal assistance such as bullet-proof vests, armored personnel vehicles and military training to the insurgents.

The Rome talks were the latest evidence that the United States and its allies have no appetite for military intervention in Syria, after the withdrawal of U.S.-led troops from Iraq and the drawdown under way in Afghanistan.

The final communique called for an immediate halt to "unabated" arms supplies to Damascus by third countries, referring mostly to Assad's allies Russia and Iran.

It also said Syria must immediately stop indiscriminate bombardment of populated areas, which it described as crimes against humanity. NATO officials say Assad's military has fired ballistic missiles within Syria, which the government denies.

The "Friends of Syria" pledged "more political and material support to the coalition as the sole legitimate representative of the Syrian people and to get more concrete assistance inside Syria", but gave no details on exactly what would be provided.

Kerry said earlier this week he would not leave the Syrian opposition "dangling in the wind" unsure of getting support.

But the White House continues to resist providing weaponry to the rebel forces, arguing there was no way to guarantee the arms might not fall into the hands of militants who might eventually use them against Western or Israeli targets.

"It's a huge debate inside the administration between those that have to deal with Syria on an everyday basis, the State Department and DoD particularly, and the White House, which ... until now has vetoed any kind of outreach to the armed groups," said Andrew Tabler, senior fellow at the Washington Institute for Near East Policy, a think-tank in the U.S. capital.

The United States says it has already provided more than $50 million in non-lethal assistance such as communications gear and governance training to the civilian opposition.

A source in the Syrian coalition, however, said even the extra $60 million promised by Washington was a pittance compared to what he said was the $40 million a day in humanitarian aid needed for Syrian refugees and internally displaced persons.

The United States has provided some $365 million in humanitarian aid for Syrian refugees in countries such as Turkey, Jordan and Lebanon and for internally displaced people, channeling this money through non-governmental organizations.

More than 40,000 people a week are fleeing Syria and the total number of refugees will likely pass 1 million in less than a month, far sooner than the United Nations had forecast, a senior U.N. official told the Security Council on Wednesday.

U.N. High Commissioner for Refugees António Guterres said his agency had registered 936,000 Syrians across the Middle East and North Africa, nearly 30 times as many as in April last year.

"We expected to have 1.1 million Syrian refugees by June. If things continue to accelerate like this, it will take less than a month to reach that number," he told the 15-member council.