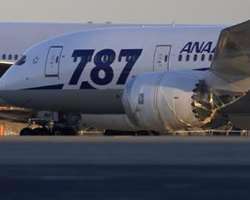 Japan's All Nippon Airways (9202.T) said it will switch to a holding company structure, putting Osamu Shinobe, the main architect of its strategy to put the Boeing Co (BA.N) Dreamliner at the centre of its fleet planning, in charge of the airline business from April.

The management reshuffle comes as the airline juggles its schedules and cancels flights with its 17 Dreamliners parked at airports in Japan until U.S. and Japanese regulators allow the aircraft to fly again.

All 50 of the technologically advanced 787s in service industry-wide have been grounded since mid-January after a battery fire on a Japan Airlines Co Ltd (9201.T) 787 at Boston airport and a second battery incident on an ANA flight in Japan.

ANA's current CEO and president, Shinichiro Ito, who has managed the carrier since 2009, will still be Shinobe's boss as head of the holding company, which will also oversee ANA's other businesses, including airport services and its trading company.

Shinobe, who joined ANA in 1976, has served as senior executive vice president since April of last year.