Mothers’ Health Is Improving Across Africa

But far too many are still dying from childbirth complications 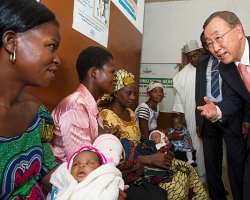 In recent years, the shrill cries of a newborn baby have been bringing more shouts of joy than of anguish in maternity wards across Africa. That is because maternal deaths are decreasing on the continent, says Gifty Addico, a South Africa-based adviser for the UN Population Fund (UNFPA).

New figures in a UN report, Trends in Maternal Mortality: 1990 to 2010, show that maternal mortality has declined by 41 per cent in the past 10 years in sub-Saharan Africa.

“More mothers and their babies are staying alive after birth, and this is a very good sign,” comments Ms. Addico, as the inflection of her voice rises in excitement. “But we need to do more to make sure that every mother lives to see her child,” she told Africa Renewal.

Maternal deaths drop
An awareness campaign called Every Woman, Every Child, initiated by UN Secretary-General Ban Ki-moon in September 2010, has been supporting efforts to reduce maternal deaths. The campaign aims to save the lives of 16 million women and children by 2015, as part of the broader drive for the UN Millennium Development Goals.

A similar programme was launched a year earlier. The African-led initiative, called the Campaign for the Accelerated Reduction of Maternal Mortality in Africa (CARMMA), was set up by the African Union in partnership with UNFPA. It lent strong support to existing strategies and plans on the ground, rather than developing new ones.

Within three years of CARMMA's initiation, 37 of the 54 countries in Africa had taken steps to upgrade national maternal health programmes and services. About 30 have made explicit political commitments, such as setting aside funds specifically for maternal health. Rwanda now offers financial incentives to health facilities that are high performers.

Akinyele Eric Dairo, a senior programme and technical advisor to the UNFPA, toldAfrica Renewal that maternal health has been improving due to “the greater attention that the African Union and its members states” have given to the problem.

Motherless children
But in the midst of such progress, the reality remains that every year more than a million children are left motherless. Globally, one in 30 women still dies from complications of childbirth, and half a million of them die from preventable causes, reports the UNFPA. “This is unacceptable,” Ms. Addico emphasizes. “Just unacceptable.”

High fees for childbirth services and hospital stays, little or no access to nearby health facilities and shortages of health workers are some of the factors affecting maternal health, explains the World Health Organization (WHO). As a result, complications in childbirth can pose very high risks to maternal and infant health alike.

Ms. Addico cites the poor quality of Africa's health systems. Mothers who make it to a hospital may have to wait long hours to see a doctor. Facilities often do not have adequate resources — either equipment or staff — to help mothers deliver.

WHO also reports that women, especially young prospective mothers, may not be fully aware of the health risks when they are about to deliver. Young women who became pregnant and gave birth between ages of 15 and 20 are twice as likely to die during childbirth as women in their 20s or older. Girls under the age of 15 are five times more likely to die during childbirth.

“This is something we need to change,” insists Dr. Ochan. He believes that working with influential cultural and religious leaders could help solve some of the issues.

Religious barriers have long posed challenges, Ms. Addico agrees. Some health facilities run by religious groups, for example, may not offer family planning options or other alternatives they disagree with.

The East African Community has made an effort to harmonize policies across that region by making sure that women who go to a religious hospital are also seen by an alternative healthcare facility.

Limited health care access for female patients suffering from HIV/AIDS is another obstacle, Ms. Addico points out. “We tend to forget that women with HIV have maternal and reproductive needs because of the [AIDS] stigma. We cannot overlook them.”

Need to invest more
Despite significant gains in maternal health, argues Mr. Dairo, there is still “a very urgent need to keep intensifying maternal health interventions.” He notes that investments in women's health, especially sexual and reproductive health, can prevent death during delivery.

According to UNFPA, only six countries (Rwanda, Botswana, Niger, Malawi, Zambia and Burkina Faso) have met the target of allocating at least 15 per cent of their annual budget to health, a goal set at an African summit on HIV/AIDS held in Abuja, Nigeria, in 2000.

Moreover, Mr. Dairo adds, many of the countries that reached the 15 per cent goal did so “due to contributions from external donors to the health sector.” He proposes that African countries deliberately and consistently set aside money from their own budgets for health care, “especially when it comes caring for women and children.”