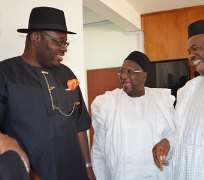 Dickson in a statement congratulated Akpabio on his chairmanship, saying it is a testimony to his vision, purposeful leadership and contributions to the growth of the party.

Akpabio, who was unanimously chosen as the chairman of the forum last Sunday, was also appointed a member of the party’s Board of Trustees (BoT).

His membership of the BoT and the creation of the PGF has also drawn commendations from the former governor of Oyo State, Chief Adebayo Alao-Akala.

Alao-Akala, who noted the importance of the new PGF to the party, said members would be free to discuss issues with the governors of the party without interventions from outsiders, “Akpabio has the pedigree and integrity to lead the PDP governors. He is someone that can be trusted. In fact, the Nigerian Governors’ Forum should allow him take over the leadership of the forum in May,” he stated.

In a related development, the Akwa Ibom Progressive Forum (AIPROF) and the Centre for Awareness on Good Governance have said Akpabio’s emergence as the chairman of the PGF and BoT member is proof that men of excellence would always have their due recognitions.

In statements signed by the president of AIPROF, Pastor Godspower Umanah and the president of CAGG, Chief Ben James, respectively, they described Governor Akpabio as a visionary and insightful leader, adding that his excellent personality and popularity across the country would be deployed to the benefit of the PDP and the entire country.

“We are not surprised that our visionary governor has been called upon to steer the ship of the newly-formed PDP governors’ forum, a golden fish has no hiding place. And we are quite confident that the party would benefit immensely from Akpabio’s wealth of experience in both his capacities as governors’ forum’s chairman and member of the party’s BoT,” AIPROF stated.