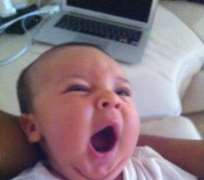 He was married to his British wife, Sarah Michaels in 2012. The former Bendel Insurance footballer announced the arrival of his child on twitter in January.

He was not named in the victorious squad that won the recently concluded Africa Cup of Nations held in South Africa. Osaze has been vocal on twitter in recent times attacking some key members of the Super Eagles squad.