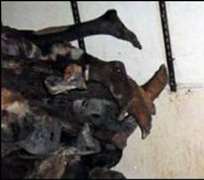 Hardly anyone remembers this headline on BBC News of Tuesday, 8 December 2009:

“Nigerian hospital 'overwhelmed by corpses from police'”, reported by Caroline Duffield, BBC News, Lagos. That hospital is the University of Nigeria Teaching Hospital in Enugu.

The short story most likely did not even register:

“A Nigerian hospital has told the BBC it is overwhelmed by the number of corpses being brought to them by police” …The Chief Medical Director at the University of Nigeria Teaching Hospital in Enugu says his staff are being forced to carry out mass burials of between 70 and 80 bodies some weeks ago…and that another mass burial is planned to take place soon.

In investigating the story, “the BBC has visited the morgue and taken photographs. The images are disturbing…They show piles of young men, lying on top of one another and strewn about on tables and floors…In places the corpses are stacked four or five deep…Records show 75 corpses were delivered to the morgue by police between June and 26 November this year.”

“Inside the mortuary in the south-eastern city of Enugu, two rooms are set aside for the remains of the young men…In the first room, they are stacked, naked, one on top of the other. In places the piles are four or five deep. Faces peer out amongst a forest of legs. Heads loll into groins. Limbs are flung around torsos. Some almost seem to embrace. The smell - and the flies - make it impossible to get close. It is a scene beyond belief.”

“The BBC has established that at least seven people were last seen alive in police custody, accused of kidnapping…” but, “Enugu State Police Commissioner Mohamed Zarewa told the BBC he was too busy to talk about their case…he was unaware of the number of young men lying dead in the morgue…that his officers are forced to engage armed robbers in gunfights and that many police officers are also killed…insists that his police force operate within the law.”

The report consoled with the announcement that: “Amnesty international is presenting the results of a three-year investigation on Wednesday, in which they will describe the level of police killings as shocking.“

The fact that BBC news carried this report, and that it was repeated in various national news media and international organizations, brought neither swift nor meaningful response—any response at all. A FedEx letter recounting the report with the pictures sent to the office of the Vice President of the USA by a concerned private group weeks later yielded nothing by way of tangible results.

That was 2009. If only we acted then, or remembered, we would have prevented the recent mass murders of another group of Igbo / Biafran youth whose bodies were thrown into the Ezu River in Anambra, making shocking news today. We would have prevented the unreported ongoing murders in smaller numbers of Igbo and other Biafran youths taking place all over Igboland / Biafraland, ALL THE TIME, at the hands of different branches of Nigeria's armed forces including especially the Police.

But, let's not kid ourselves. Killing the Igbo and other Biafrans is Nigeria's favorite pastime, since 1940's. It happens all the time, and nothing is done about it. Being in denial about such a genocidal crime against the Igbo and Biafrans is Nigeria's preferred collective state of mind, especially since 1966. It does not help that so-called Igbo leaders and elite have joined in such a denial, like the case of Governor Okorocha and one Lotanna Ojukwu who claim that the Igbo were never targeted as a group by Boko Haram. ( http://www.youtube.com/watch?v=2m5q4DG0f7U&feature=share&list=UL2m5q4DG0f7U ) Or the case of Peter Obi who, on June 20 2006, as the Governor of Anambra, actually gave “Shoot on Sight” orders to crazed and trigger-happy Nigeria's security operatives, giving them cover to continue with relish the murdering of innocent Igbo and Biafran youth in cold blood, resulting in the unnecessary deaths of many MASSOB members. It was a heartless, criminal turkey-shoot of an exercise now accepted by the sanitizing phrase, “extrajudicial killing” which has not abated since then, leaving Igbo and Biafran youth corpses and unmarked mass graves in its bloody wake.

That Chris Ngige has gotten the Nigerian Senate to form a committee to look into this matter should not be a source of consolation to anyone—that is, anyone who has a memory. Since when did any government-initiated or government-backed investigation produce and or publish its results, and even if so, have the recommendations be acted upon? The masses will be soothed by the mere sight of such a committee, somehow mesmerized into forgetting to demand results.

The Igbo and other Biafrans will have to learn to stop living in denial. They have to stop pretending that they are not being hurt daily by Nigeria; they have to stop deceiving themselves by thinking that Nigeria has the will, desire, capacity or plan to stop acting to injure the Igbo and other Biafrans and their life-essential interests. The moth can claim and act out its attraction to the flame and pretend that it is a mutual love-affair, but the result of their encounter or embrace could never be pretended away. How many times, in how many places, and by how many ways and means do the Igbo and Biafrans die at the hands of Nigeria? Can the life of the Igbo and Biafran be that worthless or meaningless that they would still continue to stay in a relationship which allows Nigeria to continue to kill them?

When targeted by race and or religion and or economic/social profiling and violently attacked in other parts of Nigeria, the Igbo have received conflicting counsel—stay put and die in the defense of Nigerian patriotism, or relocate and live in Igboland and Biafraland or any other part of the world for that matter. Those who stay put continue to be victimized and live in constant fear. Yet, those who relocate to Igboland and Biafraland are also being killed by the same Nigerian forces and influences, in Igboland / Biafraland. Thus, Nigeria daily screams to the Igbo and other Biafrans anywhere: “die, die, die”!

“What is life?” we ask the Igbo and other Biafrans. What does it really mean when the collective life of a people is constantly being bled away by the ongoing killing off of the individual members of that group by a systematic and determined machinery? Do these murderous deaths really touch the heart of the Igbo and other Biafrans—really, really—or do they merely produce sham emotions? If there is no life, what else is there? Where there is no life, what can be there?

The Igbo and other Biafrans need to show courage; or at least show a willingness to prove to themselves, to Nigeria and to the world that their life has value and is not cheap. Self Determination allows them to wrest control of their collective destiny from Nigeria and become master of their own collective fate. Only then can these killings be stopped for good, because an independent Biafra and her people could not conceive, condone, tolerate or allow such heinousness. Salvation for the Igbo and Biafra comes through Self Determination and the exercise of their right thereof. It has to happen. Now.

The Igbo have a saying thus: “The insoluble has a solution.” It is high time for a people who own and know and practice this wisdom to step up to the stage and show us.

Disclaimer: "The views/contents expressed in this article are the sole responsibility of Oguchi Nkwocha, MD and do not necessarily reflect those of The Nigerian Voice. The Nigerian Voice will not be responsible or liable for any inaccurate or incorrect statements contained in this article."
Articles by Oguchi Nkwocha, MD
23-2-2015  Moment To Reflect By Oguchi Nkwocha, Md17-9-2014  Plain Lessons From Scotland19-5-2014  Time To Say, No! To Nigeria23-1-2014  Domingo Obende And The Gay Culture: Wicked And Ignorant Valuation5-1-2014  At The Bewitching Hour: Nigeria Clocks In At 100 Still In DenialMore...