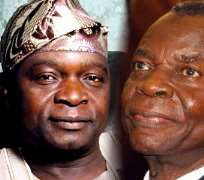 SAN FRANCISCO, February 21, (THEWILL) - Apparently spurred by the sacking of two High Court judges over professional misconduct by the National Judicial Council (NJC), Thursday, former governor of Osun State, Prince Olagunsoye Oyinlola, has called for a re-examination of the petition he submitted to the Council.

The former governor, in a letter he sent to NJC, also called on the Council to sanction Justice Salami and MTN Nigeria Communications Ltd for allegedly suppressing evidence in the call logs it sent to NJC to establish the fact that Salami had communications with Action Congress of Nigeria (ACN) leaders while presiding over the appeal that removed him from office as governor.

In the petition, Oyinlola alleged that the suspended President of the Court of Appeal, Justice Ayo Salami, had communications with the leadership of the Action Congress of Nigeria (ACN) while presiding on the election petition that got him removed from office as governor.

The former governor is basing his call on the report of a police investigation which established that, indeed, the ACN leadership and Salami were in constant communication while hearing on his petition lasted.

Oyinlola attached a copy of the police report to his letter to NJC which was delivered to the Chief Justice of Nigeria, Justice Mariam Mukthar, who also doubles as the chairperson of the Council.

He referred the NJC to the conclusion of the police report which recommended MTN Communications for prosecution for allegedly suppressing facts.

"My heart bleeds to have to forward a copy of the police report of their investigation into the allegations I leveled against MTN concerning the ignoble role the telecommunications outfit played in obstructing the course of justice, by way of its reprehensible manipulation and provision of false evidence during the hearing of the petition I forwarded to the NJC, sometimes in year 2011.

"My Lord, is there not a case of my aforementioned petition to be re-examined in light of this strong, new evidence?

"Could MTN have acted solo? If not, who actuated it to commit this grave crime being alleged?

"Does equity not demand that Justice Salami be prosecuted alongside MTN as recommended by the police?

"Are we all equal before the law?," Oyinlola stated in the letter.

The former governor had earlier called on the Attorney General of the Federation and Minister for Justice, Mohammed Bello Adoke, SAN, to commence the prosecution of MTN Nigeria Communications Ltd for allegedly suppressing evidence in the call logs it sent to NJC to establish the fact that Salami had communications with ACN leaders while presiding over the appeal that removed him from office as governor.

Oyinlola however said if the AGF is not willing to prosecute MTN, he should be granted the fiat to personally carry out the prosecution.

In the report obtained by Oyinlola, the police recommended that MTN be prosecuted for deliberately suppressing communications between the leadership of ACN and Salami.

He attached a copy of the police report which indicted MTN to the letter.

"In light of the foregoing, I am strongly of the opinion that your office would not be serving the ends of justice if your good self do not ensure that the said MTN Nigeria Communications Ltd is made to face the full wrath of the law," the letter added.

In the report, the police found as a fact that the Call Data Records (CDR) submitted to NJC for the purpose of establishing the fact that Salami had communications with ACN leaders while presiding over the election petition appeal that removed Oyinlola from office was in adequate and did not properly reveal all the communications between Salami and the ACN leaders.

MTN admitted not providing all the Call Data Records requested by the NJC but explained that it could not produce all the call logs due to lack of storage capacity.

"From the available CDRs, there is evidence of communications between Justice Salami and Tunji Ijaya who also communicated with most of the questioned GSM lines.

"A legal advice received from Legal Section of the D Department, Force Criminal Investigation, Abuja dated 8th February, 2013 opined that MTN Nigeria should be prosecuted for an attempt to suppress evidence in this case as provided by Section 167(8) of the Evidence Act."

The report, which dated 8th February and signed by Ali Amodu, Commissioner of Police, X Squad, was based on a petition to the police by Oyinlola who alleged that Justice Salami had unholy relationship that influenced his judgment when he presided over the governorship election petition matter that involved the ACN and Oyinlola and his party, the Peoples Democratic Party(PDP).

Oyinlola had told the police that when he reported the issue of unholy relationship between Salami and the ACN chieftains to NJC, the council obtained call logs from MTN through the State Security Services and the National Security Adviser but that MTN submitted an incomplete call logs to the SSS and the NSA and held back communications which were crucial to prove the existence of unholy alliance between Salami and ACN leaders.

Specifically, Oyinlola said that the call logs submitted to NJC did not cover the required period and that the Call Data Records(CDR) did not contain incoming calls.

The police in the course of their investigation retrieved the CDRs obtained from MTN by the Area G police division.

They also collected the CDRs given to the NJC by the SSS and the NSA.

The report states: "Requests were made to the MTN to furnish the detail particulars of the subscribers of the listed GSM numbers and they responded as follows: 08034004887 belongs to Justice Salami: 08034240000 belongs to Bola Tinubu and 08034010700 belongs to Tunji Ijaiya."

The report said that MTN admitted submitting incomplete calls log but said that it was based on what the company's storage capacity permitted.

She explained that MTN was governed by code of consumer practice as approved by the Nigerian Communications Commission to provide CDR for a period of three months.

According to her, MTN can only keep call logs for three months due to the company's storage capacity vis-a-vis its teeming subscribers of about 40 million and huge requests made by security agents.

In his response to the allegation that MTN failed to supply CDR between September 1st, 2010 and January 31st, 2011 to the NSA and the SSS when requested, he said that SSS applied for call logs for 240 days while NSA's application covered 247 days.

According to him, this is above their storage capacity which is programmed to supply CDR for 90 days only.