A Personal Response to Zimbabwe Critics 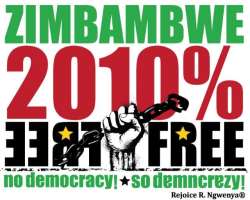 Many people who have expressed contrarian views on the wickedness of Mugabe , like yours, have only one slight problem - they won't swap citizenship with me! We liberals in Zimbabwe [and there a miserly few of us] do accept that Leander Starr Jameson and his paymaster, Cecil John Rhodes, galloped across our fore fathers' land and shot their way to the Deeds Office in 1890. Rhodes' remains are now at Matobo Hills, a world heritage site that is part of our revered National Parks. Guess who was forcibly evicted from there in the 1900s? My mother's grandfather and his entire clan!

But you see, we, modern black Zimbabweans, are more civilised, albeit poorer than the Pioneer Column. If a criminal rapes my daughter, I won't bring myself to rape his sister, wife or girlfriend, No!, for this will reduce me to his level of satanic mentality. The object lesson here, my friend, is that Mugabe first accepted, at his inaugural speech, 18 April 1980, that our history needed to be corrected, but in a civilised, law abiding way. This meant that the second and third generation of white landowners who had acquired their farms 'legitimately' - and done so well to make Zimbabwe a net exporter of grain, flowers, fruits and tobacco, needed to be integrated into the 'new civilisation'. So between 1980 and 2000, Mugabe had all the opportunity of 'equalising' the situation, because, and get this straight, the government owned more land than all private citizens combined. The 'willing buyer/willing seller' clause worked well as thousands of 'comrades' [especially Joshua Nkomo's fighters], took up land offers and produced.

Of course many 'villagers' were crowded and cramped in Tribal Trust Lands, but they were damn good farmers too! When Mugabe's political clock ran out, and the Movement for Democratic Change was formed, Mugabe lost the February 2000 constitutional referendum and accepted 'defeat'. By the way, at that time, I was chief rapporteur and convener in Professor Moyo's Constitutional Commission. When we took the first draft to Mugabe, it contained a 'willing buyer, willing seller clause', but Mugabe actually refused to accept it arguing that free land was the only thing his government could offer. We went back to plenary and Jonathan Moyo, like most senior officials in the Commission, vowed that he would resign if Chief Justice Chidyausiku changed the property rights clause.

The Chief Justice changed the clause, Professor Moyo did not resign, but I resigned and joined the Election Commission. Professor Moyo was lured with a big pay check to ZANU-PF as publicist. Now notice that the Commercial Farmers Union saw the alterations and they then put their full support behind MDC. Mugabe knew the danger of their political support to opposition, so he vowed to 'destroy them'. John Nkomo, Cephas Msika and Dumiso Dabengwa - the remnants of Joshua Nkomo's ZAPU [but now integrated in ZANU], publicly refused to support the land invasions, but Mugabe and his thugs showed them the middle finger.

Mugabe's 'land reform' is not about equity and justice, it is revenge. Mugabe had previously murdered, in cold blood, 20 000 [twenty thousand] of my tribesmen in Matabeleland in the 1980s, and I was prepared to forgive him. But when he plundered property rights and his cronies took six - ten farms each, displaced 500 000 farm workers and completely annihilated commercial farming, I made up my mind that I would oppose him all the way to my grave.

We know that in the past five years, three 'land audits' have been carried out but the results have not been published. Mugabe's cronies are the ONLY beneficiaries to land. Gideon Gono, the rabid so-called Central Bank Governor, has been doling out expensive farming inputs to party activist and friends since 2007, but our country is on the brink of famine because Mugabe's cronies were just interested in plundering produce and not making their own. Last month, the GNU agreed to start another land audit, but Mugabe's chief farm henchman, Joseph Made, says we can't have a land audit now because it's 'too early'. "New farmers have not had an opportunity to produce because of American and EU sanctions." You tell me, what are they hiding? Why have they not produced anything in ten years?

So my friend, I don't know, and don't really care which planet you come from - Mugabe has reduced me and my citizens to beggars. His thugs have plundered everything. There are three million Zimbabweans, black Zimbabweans, suffering outside our borders. The other ten million can no longer feed or employ themselves - because there is a direct relationship between property rights vandalism and productivity. I am in Zimbabwe, was born here and lived on both sides of our history. I know what I am talking about. When Ian Smith was opressing me, my father could send eight children to college and feed them. There is not a single day people had no running water in Harare, or electricity, because Ian Smith was organised. Mugabe's brand of politics - unforgiving, vengeful, Marxist-Leninist paranoia destroyed my country. I'd rather have a factory to manufacture cars than a piece of land to grow corn. Mugabe wants to turn ten million citizens into subsistence farmers - nonsense - his days are gone. History will judge him. No credit must go to him. No credit goes to a man who has presided over a murderous regime. No credit, whatsoever. If the devil buys you lunch, it's probably spiked with snake venom. What credit can you give Idi Amin, Mobutu Sseseseko? What credit can you give Adolph Hitler?

To term my letter a spitting image of colonial detractors is sure proof that there are many people out there who have bought into Mugabe's political decoy. Mugabe is a lunatic who experiments with people's life, a modern day Dracula. The man is extremely cruel, his generosity and benevolence are used as bait for votes. But I do appreciate that there is things you do not know about our situation.

Rejoice Ngwenya is President of Coalition for Liberal Market Solution and an associate of AfricanLiberty.org

Disclaimer: "The views/contents expressed in this article are the sole responsibility of Rejoice Ngwenya and do not necessarily reflect those of The Nigerian Voice. The Nigerian Voice will not be responsible or liable for any inaccurate or incorrect statements contained in this article."
Articles by Rejoice Ngwenya
15-5-2010  A Twin Case Of Treachery In Southern Africa.26-1-2010  A Plea For Mr Robert Mugabe To Retire.