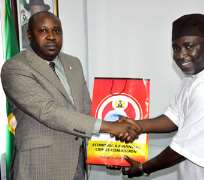 SAN FRANCISCO, February 18, (THEWILL) - The Chairman Economic and Financial Crimes Commission, EFCC, Ibrahim Lamorde has assured the Nigerian textile manufacturers that the commission will help check the incidence of smuggling and dumping of substandard textile materials in the country to protect the local textile industry.

Mr Lamorde who spoke through the Director of Operations of the Commission, Mr Olaolu Adegbite, on Monday February 18, 2013 while receiving an eight-man joint delegation of the executives and members of the governing council of the Nigerian Textile Manufacturers Association (NTMA) and Nigerian Textile Garment & Tailoring Employers Association (NTGTEA), noted that checking the activities of the manufacturers of substandard and fake textile materials falls within the purview of its broad mandate of fighting economic crimes.

In his remark, the leader of the team, Igomu said their mission to the EFCC was to apprise the Commission of the activities of fakes and counterfeiters in the textile industry and the threat which they pose to the survival of the sector. Igomu lamented that the activities of these saboteurs ( foreigners and their Nigerian collaborators) who make substandard textiles and market them as genuine using the label of some indigenous manufacturers have made nonsense of the huge investment in the sector and the incentives offered by government.

He appealed to the EFCC to rescue the textile industry from the vice grip of these saboteurs. .

In his response, Mr Adegbite commended the textile manufacturers as worthy patriots for believing in the dynamism of the nation’s economy to invest in it. He acknowledged the relevance of the textile industry to the nation’s industrial aspirations and urged members of NTMA not to be despair but to document all acts of criminality in the sector in a petition to the Commission, assuring that such petition will receive necessary attention.

Adegbite said the laws will be enforced to ensure that smugglers of substandard products are checked so as not to drive local manufacturers out of business.