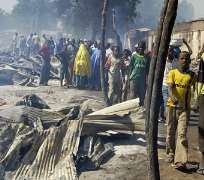 SAN FRANCISCO, February 15, (THEWILL) - Borno State governor, Alhaji Kashim Shettima, has stated that the security challenges confronting the state and the nation as a whole are not unconnected with poverty, unemployment and lack of education among the youth population.

Shettima’s declaration came on a day the governor of the Central Bank of Nigeria (CBN), Mallam Sanusi Lamido Sanusi, also blamed the Boko Haram crisis in northern Nigeria on poverty, saying for the nation to have security, there must be a viable economy.

Sanusi also maintained that the insecurity challenges facing the country cannot be treated in isolation without tackling the economic problems which have left many citizens poor.

Shettima and Sanusi stated this, Friday, while speaking at the flag-off of the Financial Inclusion Strategy Pilot Implementation in Maiduguri, insisting that the current security challenges facing the country could be traced to the economic problems.

The CBN governor said trying to solve one without the other is an effort in futility and everyone needs to bring all the resources available to tackle the problem of insecurity pervading the country.

According to Sanusi, Nigeria cannot afford to be so obsessed with the security situation in Borno State to think that the only solution is to flee the state or limit strategies to solving the challenges only without tackling what caused it in the first.

He noted that thinking that security challenges is in isolation and can be tackled in isolation is like entering a vicious cycle that will do no one any good.

On Boko Haram crisis in Borno State, he said the people and especially government and its institutions cannot continue to flee the state because of the present level of insecurity.

"We do not believe all the problem of Borno is economic but we believe strongly that if we tackle this problem we would have gone a long way to tackle the socio-political problem of the state, especially the issue of insecurity in the state," he said.

Sanusi said the population of Nigeria is distributed unevenly, with an average population of 150 per square kilometres and densely populated states are Lagos, Anambra and Akwa Ibom with the country urbanisation rate estimated at 49 percent in 2009 and expected to rise to 75 percent by 2050.

He also said that while financial inclusion is most advanced in Nigeria's urban areas, especially the Southern parts, Northern Nigeria is particularly disadvantaged with 68 percent of adults excluded in both the North-East and North-West regions.

"This afternoon (Friday), we are going to launch another development entrepreneurship centre for the North-East. This year, the Central Bank is going to build a centre of excellence in the University of Maiduguri. And for our secondary school intervention in the North-East this year, we are going to invest in the El-Kanemi College here in Maiduguri. The decision of the Bankers' Committee to select Borno State as the pilot state for the Central Bank financial intervention strategy is in recognition of the fact that the North-east of the country is one of the financially excluded part of the country," he explained.

Minister of Communication Technology, Mrs. Omobola Johnson, in her contribution, said the post office is very vital in getting most Nigerians, especially those in the rural communities financially included.

In his speech, the governor of Borno State, Alhaji Kashim Shettima, said "it is important to note that the security challenges confronting the state and the nation as a whole is not unconnected with poverty, unemployment and lack of education among the youth population."

He therefore noted that "any effort aimed at addressing unemployment will be embraced by every responsible and responsive government,” saying “ Many of the youth population is unemployed thereby creating tension and idleness among the youth making them susceptible to deviant behaviours."

The governor said: "Like financial experts have posited, the rate of adult financial exclusion in Nigeria is estimated to be 46.3 percent and is one of the highest in sub-Saharan Africa," which informed the introduction of a National Financial Inclusion Strategy (NFIS) by the CBN with the sole aim of reducing the exclusion rate to 20 percent by 2020.

He said the government had already agreed to a financial lifeline of N120 million to develop medium and micro businesses in the state.