DEATH IN THE GOLD MINES OF BAGEGA: WHAT I WITNESSED 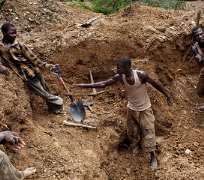 For many of our people, life really has been a walk on the edge of a ledge. People in the quest for no more than a daily bread have no choice but to risk it all. Laced with a disguised but now apparent risk of certain death to their children, many in Zamfara State, working in gold mining, meet their nemesis on headlong. How else can one describe the situation in Bagega? - a far remote village in Anka LGA of Zamfara State, which the Senate Committee on Environment and Ecology lead by Senator Bukola Saraki visited recently as part of its oversight activities. The delegation were faced with distressing cases such as a woman who had lost 9 children and another woman who had lost 3 children to lead poisoning. And yet, still these women continue with this deadly occupation of gold mining knowing well enough that this mining is the root cause of the death of their children. But there is a way for Government to support gold miners to work safely and improve their livelihoods whilst earning an income.

On 24th January the Senate Committee had taken time out on a public holiday, to visit Bagega in Anka LGA of Zamfara State after receiving ominous reports both from the media and experts in the field testifying to how lead poisoning is ravaging Zamfara. The report estimated that over 400 children had already died from lead pollution. Moved by their plight and the obvious implication on the environment, the Committee Chairman, Senator Saraki, a man never known to shy away from hard responsibility, lead his delegation to Bagega to see what could be done to turn the tide and save the vulnerable children from death.

Bagega is very far flung and remotely located, so little wonder that aside from the Chairman and his delegation, most key leadership in Nigeria have shied away from visiting the place. The delegation gathered that what was happening was as a result of the very crude gold mining techniques adopted by the villagers to mine and process the ore, so people were inadvertently poisoning themselves and their children. The gold ore was heavily laden with lead which the children ingested care-freely.

The Committee's mission was to see things for themselves, consult with relevant authorities in the state with a view to find a quick remediation of the area and bring succor to Bagega children. The Committee had been informed prior to the visit that several villages had been impacted by the lead poison scourge but through the help of non-governmental bodies like Medecins Sans Fronteres (MSF) and Terragraphics International Foundation much of the other villages had been remediated and the children in those remediated areas treated, leaving Bagega the biggest village - the size of the entire five villages earlier remediated - still contaminated. In Bagega about 1,500 children remained poisoned, and without remediation of the area, could not be treated.

At the time of the visit, the window of opportunity to remediate the area stood at roughly 4 months. However, the remediation process for Bagega could take as much as 5 months to complete. So we are already running out of time. The good news is that since after the Committee became aware of this situation and sought the intervention of government there has been an impressive response on the part of the administration as it has moved swiftly to approve the funds necessary for the remediation to begin in earnest. This example shows a collaborative effort between NGOs, the legislature and the executive can have the positive outcome of saving lives.

The delegation could see for itself the human tragedy involved here; that though these people were mining gold (some) illegally, they were not criminals just simple people trying to make ends meet. This Bagega case illustrates in vivid terms how the nation state has become so distant and removed from its citizens’ welfare that its body of laws no longer supports their right to survive but rather stifles citizen opportunities. Though their method is crude, which means that they lose much of their output, it is very clear that a lot of the deaths recorded would never have happened if we had a more inclusive structure for wealth creation and opportunity, a people welfare oriented regulatory system which in the end could have benefited both the government and the people immensely. Moved by the plight of the women and children, their industry and desire to eke out a living, the Chairman urged the women to come together and form cooperative as a way of raising capital to set up better and safer cottage industry in the area. He did not leave them with just words he immediately provided them with N500,000.00 seed money to help them start up the cooperative.

As the MSF leaders lead the delegation through a makeshift hospital and later the clinic where they have been treating the most affected children and women, down through the SUV defying terrain of Bagega to the processing zone where the team saw just misery and death everywhere.

But things could have been a lot better. Let me explain what I mean. The lead contamination results from the dry mining process and the fact that the ore is associated with high levels of lead. As the dust from the processing activities distributed the lead, much of this lead is involuntarily shipped home by the workers through their bodies, cloths, implements etc and the children who are closer to the ground feed upon it, inhale it and absorb it into their skin. Knowing that this was happening why didn't they leave mining? They simply had very few choices available for survival in a very arid and dry place like Bagega. It was hard to imagine the kind of grinding poverty engulfing this place that some families who though had lost children from being involved in the mining process, had no other choice. It was then clear to me that these people had a stark choice to make- mine, feed and die or don't mine and die of hunger anyway. They chose to at least feed before dying.

It is not too late. If we really want to grow the entrepreneurial abilities lying naturally in our people, we need to begin to think outside of the box. The story of Bagega can still be retrieved from death and squalor to one of growth, development, and most importantly industrialization. First, let the remediation work start in earnest with the release of the funds. Secondly, money should be made available for training of the miners on safer mining technique that will preserve their lives, the life of their loved ones and give them greater efficiency in output and reduce waste. The next is provide the artisanal miners with soft credit and access to technology and then formalize their opportunity through simple registration and provide them security. The government then in turn taxes them on output.

It is time to create true opportunities for our people who are less privileged, not just handouts. We need more intelligent laws and rules that are inclusive rather than exclusive. We need to use our oil resources, mineral resources and other such naturally occurring resources on our land to expand economic participation of our people. This is one of the easiest ways to create capital, expand knowledge and development and move people out of poverty. As the Chairman of the Committee said we need a horizontal economic integration process in order to empower our people. A vertical integration can only go so far. A horizontal integration starts first from getting the framework for citizen participation in the economy right. We cannot get our people out of poverty through revenue sharing alone. The answer lies more in wealth creation through broad-based participation in the economic activities of the country as envisaged by Section 16 of chapter 2 of the 1999 Constitution. The paradigm is as the Constitution stated –“the welfare and security of the people first”.