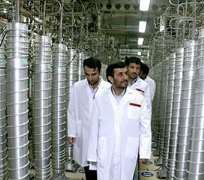 "From last month the installation of the new generation of these machines started in the Shahid Ahmadi Roshan complex (Natanz)," Fereydoun Abbasi-Davani was quoted as saying by the Iranian Students' News Agency (ISNA).

"We have produced the machines as planned and we are carrying out the installation gradually ... to complete the tests relevant to the new generation."

The U.N. nuclear watchdog had told its member states that Iran had announced plans to install and operate advanced uranium enrichment machines, in what would be a technological leap allowing it to significantly speed up activity that the West fears could be used to develop a nuclear weapon.

In a letter to the International Atomic Energy Agency, Tehran said it would introduce the new IR2-m centrifuges to its main enrichment plant near the central town of Natanz, according to an IAEA communication to member states seen by Reuters on January 31.

According to the Fars news agency, Abbasi-Davani also said on Wednesday that the new generation of centrifuges were specifically for lower-grade enrichment of uranium below 5 percent purity, and not the higher-grade enrichment to 20 percent that most worries the West.