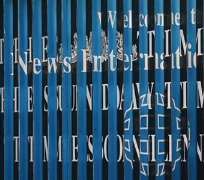 British police investigating the hacking of mobile phones to generate stories at Rupert Murdoch's now-defunct News of the World tabloid made six more arrests of journalists or former journalists on Wednesday.

The phone hacking in the new arrests was believed to have taken place in 2005 and 2006, the police said. Five suspects were arrested and taken in for questioning in London and one in Cheshire in northern England.

Operation Weeting was set up to investigate the allegation that journalists and private detectives working for the News of the World tabloid, owned by News Corp's British arm News International, repeatedly hacked into mobile phones.

Revelations that the hacking extended from celebrities and politicians to crime victims, including murdered schoolgirl Milly Dowler, caused public outrage.

The scandal escalated into a wider crisis embroiling the top echelons of the British political establishment, media, and police, and led to Murdoch closing down the News of the World in July 2011.

The latest arrests involve a suspected conspiracy separate to the one under which charges have already been made.

Earlier this month, a senior police officer was jailed after she was found guilty of offering to sell details about the phone-hacking inquiry to the tabloid, the first person to be convicted as part of the investigation.

Prime Minister David Cameron's former media chief Andy Coulson, who was editor of the News of the World between 2003 and 2007, and Rebekah Brooks, the former boss of News International and a confidante of Murdoch, are among those charged with criminal offences.

Last week, News International agreed to settle most outstanding civil lawsuits brought against it by phone hacking victims, including actor Hugh Grant and Sarah Ferguson, the Duchess of York.