Comcast To Buy Rest Of NBC Universal From GE In $16.7 Billion Deal 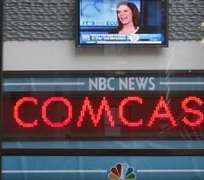 Comcast Corp clinched full control of NBC Universal for $16.7 billion on Tuesday, the latest in a series of deals that have taken the cable operator from humble roots in Tupelo, Mississippi, to Manhattan's iconic Rockerfeller Center.

The nation's largest cable operator unveiled plans on Tuesday to buy out General Electric Co's remaining 49 percent stake in the NBC Universal joint venture. That gives it full control of one of the industry's largest and most profitable stable of cable networks, as well as the NBC broadcast network with its recognizable peacock logo.

Combining properties such as USA Network, Universal Studios and more than 22 million cable subscribers, the deal completes a 50-year transformation for Comcast, which was founded by Chief Executive Officer Brian Roberts' father, Ralph, in 1963.

Comcast bought 51 percent of NBC Universal in 2011 after winning antitrust approval from the Justice Department. Tuesday's deal comes at least two years sooner than planned and creates a $39 billion business owed primarily to the success of marrying cable distribution with cable programming. The rationale behind the deal differentiates Comcast from rivals such as Time Warner Cable Inc, which separated content from distribution.

In addition to the main deal, which pushed up Comcast shares about 7 percent in after hours trading, Comcast will also gain full control of the floors NBC uses at 30 Rockefeller Plaza in New York City and CNBC's headquarters in Englewood Cliffs, New Jersey, for about $1.4 billion.

Comcast said it would fund the deal with $11.4 billion of cash on hand, $4 billion in senior unsecured notes to be issued to GE, $2 billion in credit facility borrowings and the issuance of $725 million in subsidiary preferred stock to GE.

"Given that media stocks have gone up quite a bit, it's a very attractive price, a fair price because we had a formula buyout," Roberts, who is also chairman of the company, said in an interview with Reuters.

Separately, Comcast said it would increase its dividend by 20 percent and it would buy back $2 billion in stock this year. GE also said it would accelerate its own share buy-back program to $10 billion this year.

"People may have their own opinions on whether it's good or bad strategically, but it doesn't leave any unanswered questions financially. For a transaction of this nature and this size, it's a relatively low-risk structure," Brean Capital analyst Todd Mitchell said.

LONG-HELD AMBITIONS
Comcast turned its attention to NBC after a failed $54 billion hostile takeover attempt of Walt Disney Co in 2004 that ultimately led to the resignation of that company's CEO, Michael Eisner, after more than 20 years on the job.

While Comcast held the title of the nation's leading cable operator by a wide margin, its status as a content player was always second tier, with middling networks such as E!, G4 and Golf forming the basis of its channel portfolio.

A source familiar with the situation said talks accelerated in July 2012 when NBC Universal sold its stake in A&E Television Networks for $3 billion. Comcast and GE were debating how to use the proceeds, with Comcast wanting to keep the cash in the company while GE wanted a dividend.

When it first bought NBC Universal, Comcast tread lightly, in part to smooth the way for regulatory approval. Among the concessions it offered to help seal the original deal was to adopt a hands-off policy towards the news division to ensure its independence, ensure diversity by agreeing to carry networks aimed at minority audiences and remove itself from management decisions regarding online video site Hulu. Comcast owns a passive stake in Hulu, with News Corp and Disney controlling the website's management.

Comcast also agreed to ‘net neutrality' provisions to ensure traffic to competitor websites was not interfered with and to make NBC's programming available to other cable and satellite TV distributors on equal terms.

Because the Justice Department looked at the 2011 transaction, this one would not need to be investigated, said Richard Brosnick, an antitrust expert with law firm Butzel Long.

"The only way that the government would look further at this is if Comcast violated its consent decree," said Brosnick.

A source close to Comcast said the company did not anticipate it would be required to file for antitrust approval with either the Justice Department or the Federal Communications Commission.

Comcast has slowly but steadily replaced NBC's former regime with its own people since closing the deal. Steve Burke, the longtime top lieutenant to Roberts at Comcast, runs NBC Universal. Former CEO Jeff Zucker is gone. So too is former NBC Entertainment chief Jeff Gaspin and longtime sports producer Dick Ebersol, among others.

In February, Steve Capus announced he was leaving as head of NBC News. That decision, according to sources, was motivated in part by Comcast's installing one its executives, Patricia Fili-Krushel, into the newly created position of chairman of NBC Universal News Group and making Capus, along with CNBC president Mark Hoffman and MSNBC president Phil Griffin, report to her.

Indeed, the only executives that still remain from the old regime are the leaders of cable networks and Universal Studios head Ron Meyer, who ranks as the longest-serving movie studio chief in Hollywood. On the cable side, in addition to Hoffman and Griffin, Bonnie Hammer now runs all of NBC's entertainment-oriented cable networks and Lauren Zalaznick leads its digital operations. Bob Greenblatt, the former head of Showtime, now runs the NBC broadcast network and Mark Lazarus leads the sports division.

In addition to the GE deal, Comcast reported a 6 percent rise in fourth-quarter earnings on Tuesday. In its cable business, it lost a better-than-expected 7,000 net video customers. For the year, NBC Universal's revenue rose 5 percent to $6.01 billion.