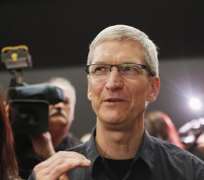 Apple Inc CEO Tim Cook dubbed David Einhorn's lawsuit against his company a "sideshow" but said on Tuesday the board is carefully considering the star hedge fund manager's proposal to issue preferred stock, calling it "creative."

Waving off claims that Apple is clinging to a "Depression-era" mentality, Cook said the board is in "very active discussions" on how to share more of its $137 billion hoard of cash and marketable securities.

David Einhorn is suing Apple as part of a wider effort to get the iPhone maker to share more of its cash pile, one of the largest in the technology industry. Einhorn wants it to issue perpetual preferred shares that pay dividends to existing shareholders, arguing that such a vehicle would be superior to dividends or share buybacks.

His clash with Apple revolves around a proposed change to its charter that would eliminate the company's ability to issue "blank check" preferred stock at its discretion. Apple is recommending shareholders vote in favor of that at their annual meeting on February 27.

The lawsuit, filed in the U.S. District Court of Southern District of New York, objects to how that charter change is bundled together with two other corporate governance-related proposals in "Proposal 2", in the proxy document for the annual meeting.

While Cook gave Einhorn credit for the idea, the usually calm chief executive seemed to become impatient when discussing the topic. He was dismissive of Einhorn's media and legal blitz - which included the lawsuit as well as multiple television and media interviews - terming last week's episode "bizarre".

Cook, who traded in his usual casual jeans attire for a suit jacket - said the more serious issue here was finding ways to return cash.

"This is a waste of shareholder money and a distraction and not a seminal issue for Apple. That said, I support Prop 2. I am personally going to vote for it," Cook told investors at Goldman Sachs' annual technology industry conference in San Francisco.

The conflict over Prop 2 "is a silly sideshow," he added. Cook said he found it "bizarre that we would find ourselves being sued for doing something good for shareholders."

Apple's share price has tumbled in recent months from a high of just over $700 last September. By late morning on Tuesday, the shares were down around 1.8 percent at $471.40.

Apple stock is a mainstay in many fund managers' portfolios, with research outfit eVestment estimating that 75 percent of U.S. large-cap growth managers had invested more than 5 percent of their portfolios in Apple as of the end of the third quarter of 2012.

But that also piles on the pressure on Apple to give away a bigger portion of its cash pile, pressure that is increasing as the share price declines and its outlook grows murkier.

Cook also touched on Apple's acquisition strategy, saying that the company has looked at more than one large acquisition but each time it didn't pass the company's internal test.

But it could do one in the future, if the technology fits.

"We have the management talent and depth to do it," he said. "We don't feel the pressure to go out and acquire revenue."

Cook, who rarely speaks at length in public, also addressed criticism that Apple's pace of innovation has slowed, saying that product innovation is embedded in its culture.

"It's never been stronger," he said. "There is no better place for innovation. Apple is the center of innovation."

Cook said the company was also trying to appeal to cost-conscious customers. Apple has moved to make the iPhone more affordable without introducing a specific cheaper phone by cutting prices of older models.

"We didn't have enough supply of iPhone 4 after we cut the price," he said. "It surprised us the level of demand for it."