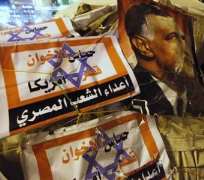 In the center of Cairo, young men hold up a burning flag for the cameras to show their fury at a nation they believe is meddling in their country and the wider Middle East.

It's a familiar image. But it's not the U.S. flag they are waving, it is that of Qatar, the Gulf state that has used its billions to spread its influence in the wake of the Arab Spring.

For most Western governments and officials, the influence of Qatar emir Sheikh Hamad bin Khalifa al-Thani's government is seen as broadly positive.

Qatar's neighbors are uneasy, however.
In Egypt, Libya and Syria, where Qatar tried to play a role post-Arab Spring, it finds itself blamed for much that has gone wrong on a local level. Close ties to Egypt's new leaders, the Muslim Brotherhood, have alarmed countries like the United Arab Emirates, where the Islamist group is still banned and which in January said it had foiled a Brotherhood-linked coup plot.

Senior officials in the UAE have long believed Qatar has long-term strategy to use the Brotherhood to redraw the region.

"There is both greater apprehension and appreciation for Qatar two years after the Arab awakening in the region," said Taufiq Rahim, Executive Director of Dubai-based geopolitics consultancy Globesight.

"While prior to the revolutions, Qatar was seen more as a mediator, its foreign policy recently has been much more proactive and in some cases partisan."

Some Western analysts and diplomats believe Qatar's leaders have been effectively improvising their way through the new landscape, experimenting to see what they can achieve with the massive wealth generated by its natural gas reserves over the past 15 years. An estimated $17 trillion in monetisable natural gas riches still remain in the ground.

Others, however, see a much more deliberate strategy.

"What we are seeing here is a high-stakes poker game for the future of the Middle East," said one Gulf-based Western diplomat on condition of anonymity.

Even supporters are concerned the country may be overstepping its boundaries and getting a reputation for playing favorites.

"There is widespread appreciation of the positive role that Qatar has played in the region," said Ari Ratner, a former advisor on the Middle East at the State Department and now fellow at the Washington-based Truman National Security Project.

"At the same time there is a broad consensus that the Qataris themselves would be better served by fully delivering on their pledges of aid and working through established governments rather than their preferred factions."

MUSLIM BROTHERHOOD?
The emirate has long been a country of sometimes baffling contradictions. While in many ways one of the most conservative of the Gulf states, it has also proved the most enthusiastic about the changes wrought by the Arab Spring.

Of the 1.9 million people who live there, only some 250,000 are ethnic Qataris, most of whom practice Wahhabism, the austere form of Islam also practiced in Saudi Arabia.

Sheikh Hamad and his glamorous second wife Sheikha Mozah have gained a reputation as modernizers in recent years, however, raising the country's profile significantly with the launch of the Al Jazeera television network and successful hosting of the 2006 Asian Games, as well as initiating the country's World Cup bid.

The emirate has always made a point of keeping as many diplomatic doors open as possible and has relished its role at the center of regional diplomacy. Of all the members of the regional Gulf Cooperation Council, it has long been the closest to Iran even as it courted Washington and hosted U.S. forces. It has been trying to inject new life into peace efforts between Sudan and rebel groups in Darfur with offers of development aid.

Its links to the Muslim Brotherhood may be similarly pragmatic and flexible. But some believe Qatar has made a risky bet to put the movement at the heart of its regional strategy.

The emirate has clearly emerged as something of a focal point for the group, originally founded in Egypt in 1928 and now with national chapters across much of the Islamic world.

Several key current or former members - including televangelist Yousef Al-Qaradwi, a former senior Brother widely watched across the region - reside in the country having fled other states. Western officials who have worked with the Qataris in Libya and Syria say they have invariably favored groups with Brotherhood connections.

As early as 2009, senior officials from the UAE were briefing their U.S. counterparts that they believed Doha's rulers were using the group to destabilize their neighbors. According to a diplomatic cable released by Wikileaks, Abu Dhabi Crown Prince Mohammed bin Zayed al-Nahayan told U.S. officials Qatar was simply "part of the Brotherhood".

"We have a clear policy which is not to interfere in the internal affairs of any state," he told Kuwait's al-Rai newspaper in a September 2012 interview.

Few take that statement at face value, however.
Qatar's funding and direct support - including weaponry and the deployment of special forces - were key to building the capacity of opposition fighters first in Libya.

As President Mohammed Mursi's government in Egypt has struggled with mounting economic woes, Qatar has stepped up as an increasingly vital financial backer. In Syria, it has been a leading supplier of rebel arms.

But already, Qatar is feeling the heat for its actions. In Libya, Qatar is being blamed for an increasingly destabilizing rise in Islamist intolerance and violence. In Egypt, it finds itself caught up in the popular dissatisfaction with Mursi and accusations of economic imperialism: a multibillion dollar Suez Canal investment deal was described by protesters as a foreign attempt to seize control of vital national assets.

In Syria, critics say its shipments of arms to rebels has become a chaotic free-for-all. Current and former Western officials say Qatari officials and rich Arabs from Saudi Arabia and elsewhere have been cutting ad hoc deals on the Turkish-Syrian border with a disparate collection of opposition groups.

Even Al Jazeera - which played a crucial role in spreading the word of the 2011 unrest - is facing complaints of mounting and usually pro-Brotherhood bias. While the English-language service is seen as more neutral, the station's Arabic service is widely viewed as openly espousing a pro-Muslim Brotherhood agenda.

FAILURE TO COMMUNICATE?
Diplomats say Qatari officials have been surprised at the pushback.

One problem, those who watch Qatar closely say, is that with only a handful of senior royals and officials controlling policy it is all but impossible for the outside world to know what their strategy is.

Officials rarely answer media requests for information and there is no foreign ministry or government spokesman. For the handful of foreign media based in Doha, the only way of getting official comment is to accost officials at public events, and even then they are often tight-lipped.

No Qatari official was available to comment on this story.

"They are simply not explaining what they are doing properly," said one Doha-based analyst on condition of anonymity. "Conspiracy theories are rife."

Western governments and corporations with an eye on Qatar's vast gas wealth and investment portfolio have so far tended not to concern themselves too much with its politics. A higher profile is bringing with it greater scrutiny, however.

The arrest and sentencing of a local poet to life imprisonment late last year for writings critical of the government spurred widespread international condemnation and accusations of double standards.

Indeed, Qatar's problems with its neighbors may be only just beginning.

"People asking questions are met with walls of silence," said the Doha-based analyst. "That doesn't wash very well with an Egyptian who has just been shot in the leg in Tahrir Square."