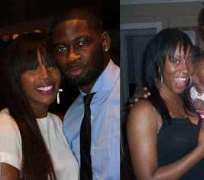 Last week, on Tiwa Savage's 33 birthday, after many denials of any romantic link between her and her manager, Tunji Balogun known as Tee Billz, the singer was openly proposed to by her manager.

Before now, Tee Billz has made it clear that he was not having anything romantic to do with Tiwa Savage.

Tee Billz, who already has two kids from a woman based abroad, almost insinuated that nothing was wrong with his relationship with his abroad-based babymama and his mother of two children.

It may have become a huge shock to the said lady who has now finally lost Tee Billz to sexy Tiwa Savage. Husband snatching saga now getting into the Nigeria music industry after eating deep into Nollywood?

Here are pictures of Tee Billz with his babymama and children before he proposed marriage to Tiwa Savage.

It is almost going in the direction that Tee Billz' babymama will have to look for another Val this year as the 'more' sexy and hot Tiwa Savage has displaced the 'less atomic element' on the 'periodic table'.