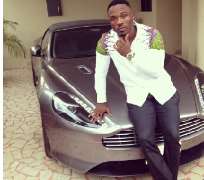 'Kukere' crooner, Iyanya Mbuk has announce his acquisition of an expensive automobile. The Calabar, Cross River State-born singer posted on his Instagram page a picture of the car and dropped a note 'who God don bless'.

Iyanya, who has been smiling to the bank since his Kukere hit single became a household song, has bought a N30million Aston Martin car.