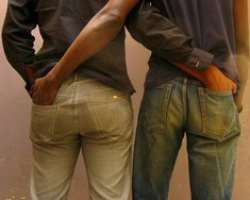 Lesbianism or homosexuality is a White people's disease known in modern times as the David Cameron Syndrome or (DCS) for short. The British parliament this week approved same sex marriage law. With a gay Prime Minister, the law was long overdue. When the head is rotten, it does not take long for the rest of the body to be contaminated. And with theirs and other western economies collapsing; their governments and institutions moribund; populations aging dangerously (with less than 20% below age 16) and marrying same sex or dogs; Whites have booked their one way tickets out of existence.

……………………………………………………………………………
By Naiwu Osahon
……………………………………………………………………….
Lesbianism or homosexuality or being gay, the generic term, is a White people's disease that requires medical attention as does AIDS or mental illness because, it unbalances the sufferers, causing males to start behaving like females and vice versa. In fact, the Whiteman's Bible claims that it is a curse on the Black race whereas it is peculiar to them, confirming they lied by distorting the story of Mr.

Ham whom the Bible claims was a son of Noah and cursed by his father, juxtaposed into the Hebrew God Yahweh. The truth is that Africans are the ancestors of the human race and Noah, also known as Kosh, was Black and a Chaldean God, deriving genealogy from God Anu, who derived his from Father Enlid, the Lord of the true word and the Pastor of the Blacks.

The White mythical Noah and his three sons, Shem, Ham and Japheth, therefore, could only have been Black. Ham turned White, as did all the cursed in the Bible: Gahazi, Eljahas, Greedy servants: Kings 11:

5, 27), when he uncovered and sodomized his father (Genesis 9: 22, 24). Proof of this is evident today. Ham's White descendants have legalized homosexuality and sodomy, with same sex marrying each other.

They say it is human rights and yet they legislate against suicide attempts or abortion, which both are less fatal to human survival.

Because of their curse, they turned pale, and out of anger and frustration, they fashioned a religion of hate and oppression to enslave Africans and deform African scintillating contributions to civilization. Could a continent with 85% of the world's gold and 95% of the world's diamonds have been cursed? Was that not the type of land promised Abraham in (Ezekiel 20: 6,15)?

Lesbianism or homosexuality is a serious crime in African traditions.

It is anti-human, anti-nature, and worse than bestial, because it is not the norm in the rest of the animal kingdom, and if it happens, it is only by default or in abnormal circumstances such as the freak of nature, mental or psychological ailment, human interference, warp sense of self or a self-destructive streak, as is likely in humans equating self with lizards. The most popular animals that humans are screwing at the moment, (humans initiated the move by the way), include horses, donkeys, dogs, goats... Of all these, only the male dog so induced by their female owners, have cued into the idea of screwing their female owners.

The other animals would generally not consider humans sexy enough and would not make the first move. While human females carry tell-tale buttocks' scratch marks from their excited male dogs, female dogs bit their human male sexual abusers for being so base, and even docile animals like she goats bleat alarmingly through the experience to alert the world to the abnormality. This confirms that apart from the freak of nature or insanity in wild animals, if animals anywhere are buying into the deviant behaviour, humans taught, drugged or induced them into doing so. Just as the generation of male dogs trained or cajoled into enjoying their human mistresses at the moment, would pass the genie on to their next generation. The deranged behaviour represents the highest form of societal rot and decadence. It has no merit what so ever, unless to punish the human race with new and devastating diseases.

If they are not giving medals to their sane citizens to go gay, what gives the British Prime Minister, Empress David Cameron – a racist, heartless dodger of reparations for the colossal damage his race has already caused Africa – the temerity to tell Africa: “go gay or loose my aids.” He can use his measly aids to nurse his sore and bleeding cissy-bum. Barack Obama's October 2012 anti-Uganda and earlier Kenya DCS promotion dance, obviously was for the purpose of his winning re-election at home or was it his 50% White that was struggling to be heard? The Canadian Prime Minister joined the frail at the October

2012 world's Parliamentary Conference in Canada thinking Africa is still their backyard colony. These people are mentally disturbed, I tell you. They are bent on continuing to destroy the world and marginalizing the African race, and until they are forced to pay reparations for the hell they have already put Africa through, they would never learn.

Sexual deviance, spells self-enfranchisement from the human family, and Africa should treat it as such. Whites, including NGO 'do gooders,' supposed child adopters, Reverend fathers, going to Africa to turn Blacks gay, should be watched, laced with tyres and mob burnt alive, when caught. White Heads of States and other leaders visiting Africa should be closely monitored around their Black service providers or servants in guest houses and exposed or humiliated.

Africans should begin to watch their asses when around Whites. If any race wants to self-destruct, may be that is their curse after centuries of oppressing and dehumanizing other racial groups. Now that they are marrying same sex, dogs and donkeys, they have obviously reached the dead end of moral depravity, and there is nothing hip about self-imposed racial annihilation through homosexuality and deviant sexual degeneracy. Nothing in it to imitate since the Black race must survive to restore virtuous civilization to the New World of the new millennium.

With western economies collapsing; their governments and institutions moribund; populations aging dangerously; their young marrying same sex or dogs; Whites have booked their one way tickets out of existence and cannot be trusted with writing the Bible for the living. They have run out of ideas if they ever had any but lies. If they tell you to run, standstill, and if they say eat, starve. We must break out of their suicidal cocoon and save them against themselves because as in origin, so now, the future of the human race is the responsibility of the African as the first born, to restore, repair, nurture and guide to holistic and robust fulfillment.