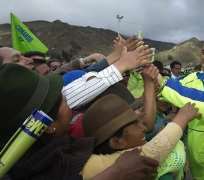 Two supporters of Ecuador's president Rafael Correa were killed on Monday and four more suffered stab wounds during a campaign rally almost two weeks before a presidential election that the leftist leader is expected to win comfortably.

"Crazy person stabs seven AP people while they were waiting for the President. Two have been killed," Correa said in his Twitter account, referring to supporters of the ruling Alianza Pais political movement, known as AP.

In a video shown on local TV networks a man could be seen breaking through a rally of a few hundred pro-government supporters and attacking them with a large knife.

"Before the president was due to arrive ... we can see in these images how this person stabs the people that were standing up front repeatedly," said Interior Minister Jose Serrano at a press conference in Quito.

He said that four people were wounded and that police had arrested the person who they think carried out the attack.

The incident occurred ahead of a campaign rally in Quininde, a town in the western Esmeraldas province.

"Best wishes to the families of the Quininde victims. The video of the attack is spine-chilling," Correa said.

Correa, an ally of socialist Venezuelan leader Hugo Chavez, is expected to win the February 17 vote. Polls give him between 50 percent and 60 percent of votes, at least 30 percentage points ahead of his nearest rival, Guillermo Lasso, a former banker.

The 49-year-old is very popular in urban shanty towns and rural areas, where millions have seen their livelihoods improved thanks to record spending in roads, hospitals and schools.

Such support has helped Correa stay in power for six years, making him the longest-running Ecuadorean president for at least four decades. Widespread protests forced three presidents to resign in the decade before he took office.

A Correa victory would be a boost to the alliance of left-wing Latin American presidents at a time when Chavez, the bloc's figurehead, is battling to recover from cancer surgery in Cuba.

But it would also mean an extension of his fight with the private sector.

The U.S.-trained economist has been at odds with foreign investors since taking office in 2007. He rattled Wall Street when he defaulted on $3.2 billion on foreign bonds in 2008, and two years later forced foreign oil companies to sign deals granting the state a larger share of their revenues.

Where as foreign investors are pouring billions of dollars every year in neighboring Colombia and Peru, they only invested some $650 million in Ecuador in 2011.

Ecuador is OPEC's smallest member. Its oil output has been stagnant at around 500,000 million barrels per day for the past five years in part due to low foreign investment.