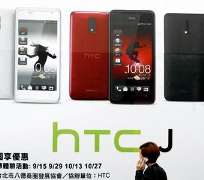 Taiwanese smartphone maker HTC Corp will shift its focus more towards emerging markets and offer lower priced phones in China this year as it grapples with slumping revenue in the shadow of Apple's iPhone and Samsung's Galaxy series.

HTC gave a disappointing outlook on Monday for first-quarter revenue, saying it would be flat to 17 percent lower than in the previous three months - worse than analysts had forecast - while margins are also seen holding steady or shrinking.

The former contract manufacturer's fortunes have been declining sharply since the second half of 2011, as the growing global dominance of Apple Inc and Samsung Electronics Co Ltd in smartphones quickly deflated the success of its own brand's rapid rise.

China, the world's most populous nation and a rising consumer power, is a key battlefield for smartphone makers with its still low levels of penetration, but its price-conscious consumers pose a dilemma for premium brands keen to maintain their high-end image but eager to tap the mass market.

HTC Chief Financial Officer Chang Chia-Lin told a conference call for investors on Monday that his company, which has tended to rely on developed markets for most of its revenue and in China has focused on mid- to high-end models, was now ready to offer smartphones priced less than 1,999 yuan ($320) - currently its cheapest phone in China.

Apple Chief Executive Tim Cook has vowed to focus on Greater China as his company's next big growth driver. Apple's revenue from the region jumped to $7.3 billion in the December quarter, up 60 percent from a year earlier.

Analysts had forecast HTC would earn revenue of T$62.77 billion for the quarter, according to the average projection of 18 analysts polled by Thomson Reuters I/B/E/S.

The weaker-than-expected first-quarter revenue outlook follows a 91 percent year-on-year slide in the Taiwanese company's net profit in the fourth quarter that fell short of analyst forecasts.

Analysts doubt that 2013 will be a turnaround year for HTC as the power of its brand lags far behind Apple and Samsung.

But some have said that the next version of its flagship smartphone, code-named "M7" and which they expect to be launched in the middle of this month in New York and London, could give the company a first-mover advantage of a few months on features such as higher-resolution cameras.

Chang declined to give details or a launch date for the new model but said he expected sequential revenue growth quarter to quarter in 2013 as the company rolls out new products.

Samsung Electronics, the world's top smartphone maker, said last month that it expected the global smartphone market to shrink in the first quarter from the seasonally strong fourth quarter, while the overall handset market would see growth at a mid single-digit percentage rate this year from 2012, with the smartphone segment set to slow.

Strong smartphone sales powered an 89 percent increase in operating profit at the Korean company in the October-December quarter to a record $8.3 billion.

Cupertino, California-based Apple, which faces intense competition from Samsung, sparked a slide in its share price late last month when it forecast lower revenue of $41 billion to $43 billion in its current fiscal quarter, down from $54.5 billion in the previous quarter and below the average Wall Street forecast of more than $45 billion.

On Monday, shares of HTC fell 1.6 percent, versus a 0.9 percent rise in broader market. HTC's shares have fallen more than 40 percent since the start of last year, compared with a 12 percent rise in the Taiwan stock benchmark.