AFTER WARS, IT'S A 'NEW DAY' IN AFRICA 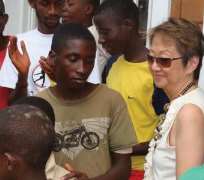 Judy Cheng-Hopkins on the UN’s peacebuilding work in Africa

Africa Renewal It has now been a few years since the Peacebuilding Commission and your Peacebuilding Support Office were set up. Do you see any tangible progress in those countries where the UN has been most active in peacebuilding activities?

Judy Cheng-Hopkins In peacebuilding, six years, seven years is a very short time. These are fragile states, with weak institutions, that have emerged from decades of civil war. That makes it doubly hard to do anything right. Having said that, the two countries on the agenda [of the PBC] the longest, Sierra Leone and Burundi, are actually not in a bad place today.

Sierra Leone will have elections later this year [elections were successfully held], if all goes well, and will pass a new threshold. We started a lot of nascent institutions, like an anti-corruption commission and a human rights commission. They’re starting to do their work.

In Burundi, there have been very few security incidents, whereas in the past there were a lot more. When I was previously in Burundi two years ago, I saw hardened combatants, young men with that hungry look in their eyes, a bit angry, a bit confused over what we were trying to do with them. Fast forward to two years later, to go to a site where a lot of them were involved in drying fish for sale, to see them in agricultural projects, to see how their lives have changed, you really feel quite satisfied that what you’ve done has gone right.

AR Talking to civil society activists in Africa, one often hears a complaint that the donor community often comes in with a cookie-cutter approach, simply applying solutions that have worked in other countries, without consulting enough with local communities and civil society. Any reaction?

JCH First of all, I don’t think the cookie-cutter approach is applicable anymore. After 50 years of development cooperation, people have learned that you can’t just transport one model onto another country. So that’s not it. But I think they’ve got a point though: that we don’t consult enough with civil society.

As far as we are concerned, I know that whenever I go into the field I insist on seeing people in civil society. The problem though is that civil society is huge. Who are we talking about? The one who you are talking to, can he say that he represents five or six organizations? What do they represent, thematically or in terms of membership, so that we can really move forward in a productive way?

AR In many of these countries, corruption was a major issue aggravating the problems that led to war in the first place, and these states still face difficulties in fighting corruption. How does that affect their aid prospects?

JCH I don’t want to sound naive, but I think a good many of them see that this a new day. This is past the Cold War, when aid was given willy-nilly because of other ends. Now donors are a lot more cognisant to be accountable and to deliver results. So every single country that has emerged from war realizes they need to have better, more transparent systems in order to continue attracting aid.

If you have the self-confidence of your vision for your country and you’re clear about how transparently you’re going to track the money they want to give you, why would a donor today want to turn away from that? You see that happening in Liberia now. They have that vision, in 2030, where they want to be a middle-income country. They say they’re going for the most transparent way of tracking their budgets. So I think people like President [Ellen] Johnson-Sirleaf get it.

AR When a country has valuable natural resources, foreign investors are often interested in coming in. What are the challenges in ensuring that they don’t simply come in and take what they want, without benefiting the country?

JCH We have six countries on the PBC agenda. Except for one, which also has potential wealth, I would say that the other four or five are rich, rich, rich in natural resources. Guinea is one, rich in tin and iron ore and bauxite. And yet, how many people are living on $2 a day? So how do you translate that wealth into social services, education and health for its people? That is the big challenge. The key is to strike the right balance between working for governments, but not scaring away the private sector.

AR Aside from getting economies moving again over time, are there any shorter-term ways to tackle the problem of widespread youth unemployment in post-war countries?

JCH That’s very tough. There really has to be some public works programmes if you’re thinking of hiring a good number of people. In a way, that’s what we’re doing to reintegrate our ex-combatants, to put them in a public works programme. I see road repairs everywhere. Working with project implementers, such as UNDP or a non-government organization, we spend some time observing them, to see what their attributes are and if they’re willing to work with one another. We then move to the second phase, to a cooperative, smoking fish or something else. Building them up and introducing a micro-enterprise programme, with their own savings, so that they can see that their own sweat and tears went into it, because then they value it more.

AR Any concluding comments?
JCH From what I see — and I’m not saying this romantically — but I really think there’s a new day for a lot of Africa. There are so many unexplored areas of wealth in the continent. I would say that for a lot — not all — of the countries, unfortunately they had to suffer from bad leadership. But now we’re seeing clean elections in one country after the other, producing leaders for the next phase. People realize it is a new day. So a lot of optimism for the century to come.