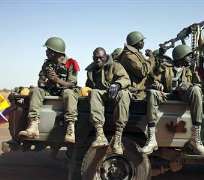 French troops seized the airport in Mali's northern town of Kidal, the last urban stronghold held by Islamist insurgents, as they moved to wrap up the first phase of a military operation to wrest northern Mali from rebel hands.

France has deployed some 4,500 troops in a three-week ground and air offensive to break the Islamist rebels' 10-month grip on major northern towns. The mission is aimed at heading off the risk of Mali being used as a springboard for jihadist attacks in the wider region or Europe.

The French military plans to gradually hand over to a larger African force, tasked with rooting out insurgents in their mountain redoubts near Algeria's border.

Defense Minister Jean-Yves Le Drian said French forces using planes and helicopters defied a sandstorm late on Tuesday to capture the airport but had been prevented by the bad weather from entering the town itself.

"The terrorist forces are pulling back to the Adrar des Ifoghas mountains which are difficult to access," Le Drian told a news conference. "There is support from Chadian and Nigerian troops coming from the south."

The deployment of French troops to remote Kidal puts them in direct contact with pro-autonomy Tuareg MNLA rebels, whose rebellion last year was hijacked by the Islamist radicals. Le Drian said France had established good relations with local Tuareg chieftains before sending in troops.

MNLA leaders say they are ready to fight al Qaeda but many Malians, including the powerful military top brass in the capital Bamako, blame them for the division of the country. They view Paris' liaisons with the Tuaregs with suspicion.

French and Malian troops retook the major Saharan trading towns of Gao and Timbuktu at the weekend.

There were fears that many thousands of priceless ancient manuscripts held in Timbuktu, a UNESCO World Heritage site, might have been lost during the rebel occupation, but experts said the bulk of the texts were safe.

The United States and European governments strongly support the Mali intervention and are providing logistical and surveillance backing but do not intend to send combat troops.

The MNLA rebels, who want greater autonomy for the desert north, said they had moved fighters into Kidal after Islamists left the town earlier this week.

"For the moment, there is a coordination with the French troops," said Moussa Ag Assarid, the MNLA spokesman in Paris.

A spokesman for the Malian army said its soldiers were securing Gao and Timbuktu and were not heading to Kidal.

The MNLA took up arms against the Bamako government a year ago, seeking to carve out a new independent desert state.

After initially fighting alongside the Islamists, by June they had been forced out by their better armed and financed former allies, who include al Qaeda North Africa's wing, AQIM, a splinter wing called MUJWA and Ansar Dine, a Malian group.

RISK OF ATTACKS, KIDNAPPINGS
As the French wind up the first phase of their offensive, doubts remain about just how quickly the U.N.-backed African intervention force can be fully deployed in Mali to hunt down the retreating al Qaeda-allied insurgents. Known as AFISMA, the force is now expected to exceed 8,000 troops.

"Liberating Gao and Timbuktu very quickly was part of the plan. Now it's up to the African countries to take over," he told the Le Parisien daily. "We decided to put in the means and the necessary number of soldiers to strike hard. But the French contingent will not stay like this. We will leave very quickly."

One French soldier has been killed in the mission, and Fabius warned that things could now get more difficult, as the offensive seeks to flush out insurgents with experience of fighting in the desert from their wilderness hideouts.

"We have to be careful. We are entering a complicated phase where the risks of attacks or kidnappings are extremely high. French interests are threatened throughout the entire Sahel."

An attack on the In Amenas gas plant in Algeria earlier this month by Islamist fighters opposing the French intervention in Mali led to the deaths of dozens of foreign hostages and raised fears of similar reprisal strikes across North and West Africa.

NEED FOR RECONCILIATION
The French operation has destroyed the Islamists' training camps and logistics bases but analysts say a long term solution for Mali hinges on finding a political settlement between the northern communities and the southern capital Bamako.

Interim President Dioncounda Traore said on Tuesday his government would aim to hold national elections on July 31. Paris is pushing strongly for Traore's government to hold talks with the MNLA, which has dropped its claims for independence.

After months of being kept on the political sidelines, the MNLA said they were in contact with West African mediators who are trying to forge a national settlement to reunite Mali.

"We reiterate that we are ready to talk with Bamako and to find a political solution. We want self-determination, but all that will be up to negotiations which will determine at what level both parties can go," Ag Assarid said.

There have been cases in Gao and Timbuktu and other recaptured towns of reprisal attacks and looting of shops and residences belonging to Malian Tuaregs and Arabs suspected of sympathizing with the MNLA and the Islamist rebels.