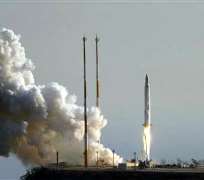 It was South Korea's third attempt to launch a civilian rocket to send a satellite in orbit in the past four years and came after two previous launches were aborted at the eleventh hour last year due to technical glitches.

The launch vehicle, named Naro, lifted off from South Korea's space center on the south coast and successfully went through stage separation before entering orbit, officials at the mission control said. Previous launches failed within minutes.

South Korea's rocket program has angered neighbor North Korea, which says it is unjust for it to be singled out for U.N. sanctions for launching long-range rockets as part of its space program to put a satellite into orbit.

North Korea's test in December showed it had the capacity to deliver a rocket that could travel 10,000 km (6,200 miles), potentially putting San Francisco in range, according to an intelligence assessment by South Korea.

However, it is not believed to have the technology to deliver a nuclear warhead capable of hitting the continental United States.

The test in December was considered a success, at least partially, by demonstrating an ability to put an object in space.

But the satellite, as claimed by the North, is not believed to be functioning.

South Korea is already far behind regional rivals China and Japan in the effort to build space rockets to put satellites into orbit and has relied on other countries, including Russia, to launch them.

Launch attempts in 2009 and 2010 ended in failure.
The first stage booster of the South Korean rocket was built by Russia. South Korea has produced several satellites and has relied on other countries to put them in orbit.

South Korea wants to build a rocket on its own by 2018 and eventually send a probe to the moon.