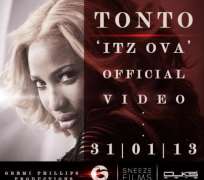 Tonto, who delved into music in mid-2011, when she hit studio with Kaz, released two singles, 'Itz Ova' and 'Hi', in late 2012, which got over 3million downloads online in 24 hours.

She had earlier boasted that she would be the first actress to become a successful musician in Nigeria.