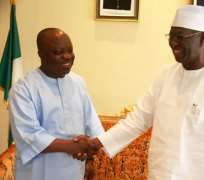 SAN FRANCISCO, January 28, (THEWILL) – Delta State Governor, Dr Emmanuel Uduaghan has said that the gigantic projects being executed by his administration was spurred by the need to leave behind landmark projects that will stand the test of time.

The Governor made the disclosure at the weekend while playing host to Peoples Democratic Party (PDP) chieftain, Chief Tony Anenih in Asaba.

According to the Governor, such projects like the new Government House, Asaba International Airport, etc were very important for the state, and decried a situation where the state was without a befitting Government House before now.

He said: “We deserve to have a befitting Government House, we are working towards leaving behind legacies of landmark projects.”

He also, stated that he believes more in working for the people quietly and allowing people to appreciate what was on ground than engaging in publicity glitz, assuring that the government and people of Delta State would always support President Goodluck Jonathan.

“The President is one of us and we are solidly behind him knowing that his programmes will bring development to this country,” the Governor said observing that Chief Tony Anenih deserves kudos for playing vital roles towards uniting Nigerians and making the country move forward.

He observed that the country is facing a lot of challenges and it was important for Nigerians to work towards surmounting such challenges.

Earlier, Chief Anenih had commended Governor Uduaghan for the giant strides his administration has recorded noting that the new Government House project is a well executed project.

He thanked the Governor for being credible, hardworking and his contributions to the growth of the PDP, stating that he was in the state to discuss issues that would lead the country forward.

While noting that the corporate existence of Nigeria cannot be compromised, Chief Anenih stated that Nigerians should believe and work for the progress of the country.