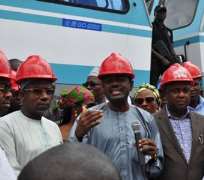 Jerry Gana, the Bida, Niger State born professor of geography carved a niche for himself whilst he presided over as the information and communication minister under the President Olusegun Obasanjo led administration.

Media Savvy, Witty and astonishingly easy-going, professor Gana alongside the then National President of the Nigerian Union of Journalists (NUJ) Mr. Smart Adeyemi ( who later moved on to become an elected Senator) were the brains behind the introduction of the national good governance tour whereby officials of the federal ministry of information alongside Journalists from various media houses attached to cover the information ministry in Abuja, traversed the length and breadth of Nigeria inspecting the progress of work on the projects executed by the different agencies of the federal government and the state governments.

While it lasted, the professor Gana-led national good governance tour came under heavy criticism for deviating from the original objectives of the exercise and veered off into the arena of the politics of scoring the different state governors depending on whether the state executives were friendly or foes of the powers – that-be in Abuja and depending on the size of the envelopes with which the state governor greesed their hands, so they alleged.

Those critics who leveled the allegations of bias against the federal information ministry’s-led national good governance tour said the exercise was a well -coordinated campaign tool of the political party in power at the federal level to promote the interest of their foot -soldiers [who held sway as governors] in the various states who due to lack of popularity were at the verge of losing out at the approaching elections.

Still others who are uncomfortable with the national good governance tour dismissed it as a charade since according to them, the best way members of the fourth estate of the realm could better assess the performance of elected public office holders at both the federal and state level is not to embark on juicy and properly teleguided inspection of selected and predetermined projects some of which are mere white elephant projects that have no relevance or values to the people of such constituencies who in the first place are not usually carried along by officials of federal government agencies in the preparation, design and execution of projects sited in their domains supposedly to serve their public good.

Those belonging to the above school of thought, clearly pointed out to section 22 of the constitution of the federal Republic of Nigeria to graphically demonstrate that media workers need not be ferried around in exotic vehicles by government officials on daily but juicy wages just so as to inspect the progress of work on the projects being executed by the government of Nigeria for the benefit of the Nigerian people.

For the avoidance of doubt, section 22 of the constitution stated thus; “The press, radio, television and other agencies of the mass media shall at all times be free to uphold the fundamental objectives contained in this chapter and uphold the responsibility and accountability of the government to the people”.

This aspect of the constitution did not say that members of the media shall be ferried in chaffeur-driven exotic vehicles by government officials for the purpose of carrying out this fundamental constitutional objective of upholding the responsibility and accountability of the government to the people of Nigeria.

If the saying that he who pays the piper dictates the tune holds true in this discussion, then it is difficult to see how a journalist provided with all the good things that money can buy could as well remain objective in reporting dispassionately what they notice during the national good governance tour for the reading pleasure of their readers who are the Nigerian people that own the sovereignty of Nigeria.

Moreover, there is the possibility that the sweetness and strenght of the fine wines gulped during these guided tours may influence the output of the media workers. I stand to be corrected.

In the current dispensation, the minister of information Mr. Labaran Maku has waved aside these criticisms against the good governance tour and has indeed embarked on elaborate national good governance tour which is elaborately covered on public owned broadcasting stations but also enjoy generous coverage in the private media of electronic and print.

The ongoing national good governance tour is unraveling and has indeed showed the underbelly of the organized confusion and huge contraption that we call governance in Nigeria.

Developments from the national good governance tour so far has graphically depicted the total lack of synergy between some of the federal government agencies and some state governments.

The other day in Imo state while the so-called good governance tour was taking place, the Imo state deputy governor Mr. Jude Agboso told the minister of information that the Imo state government was unaware that the Niger Delta Development Commission (NDDC) was building a youth skill acquisition/empowerment center in a town near the State capital.

The deputy governor proceeded to urge the federal government to always consult the state administration before embarking on any development project which will ultimately benefit the people. The minister of information faulted the claim of the Imo state deputy governor saying that the state has a representative at the Niger Delta Development Commission and therefore must have been carried along.

Speaking to journalists, the state Commissioner for Information, Inuwa Bwala, said the ongoing visit of Maku across the country was nothing but a cover up of the Federal Government’s inadequacies and that the team led by the Minister of Information has no business visiting the state as there was no single project-ongoing or completed-that has been executed by the Federal Government in the state due for inspection.

Bwala said the Good Governance Tour to the state would rather remain a tea party as it does not in any way represent the yearnings and needs of the people of Borno who had been abandoned by the Federal Government in most of the times they needed their presence.

He said; “it should stop paying lip service to the issue of development and be fair to all states irrespective of their party differences. All we have here in Borno are projects executed by the state government and I don’t think the Federal Government team will come to a state and inspect projects that it had not committed a dime in their execution”, Bwala pointed out.

“For many years now, Borno State has been battling with insecurity, flood and so on, but neither the presidency or its top aides had deemed it fit to visit us as a people, so what makes them think we need them now? The only Federal Government project existing in Borno are the Maiduguri-Kano Highway, the Chad Basin Development Authority (CBDA) and most of the dilapidated federal roads quoted in several budgets have been abandoned..."

Borno is not alone but the difference is that while other States such as Imo, Ebonyi and Kogi that suffer similar marginalization have through their governors chosen to wine, dine and make merriment using scarce fund belonging to their states to stage elaborate reception parties for the Labaran Maku-led national good governance tour, Borno has spoken truth to power.

In Imo state for instance, the only federal presence is the Okigwe/Owerri Road which is in the most dilapidated and dysfunctional state even as the Federal government has not thought it wise to bring federal presence to the entire Imo state which happens to be part of the crude oil producing states in the country . Imo state does not have any dam or water project from the huge annual federal budgets since 1999.

what an Irony?
For me, the best way to promote independent assessment of how the process of governance take place in Nigeria is not to embark on these meaningless “Owambe” parties and Jamborees by the federal ministry of information. But the institutions of government at every level must be made to comply with the provisions of the Freedom of Information Act of 2011 so that the media and other members of the civil society-faith-based groups; community based groups and other non-state actors, can easily access basic information on how the budgets of these tiers of government are executed.

Ministries of Finance and offices of state Auditors must be made to publish on regular basis, audited accounts of their respective state governments and local councils so that interested persons can objectively analyze them and possibly for whistle-blowers to report any suspected heist of public fund to appropriate authorities including the anti-graft agencies which must be legally transformed to become truly independent and patriotic. Local government authorities must be made autonomous and state governors must be stoppd from stealing from allocations meant for these local councils even as the democratic structures in these councils must be re-established ane made up of good spirited community leaders to truly transform this tier of government that is the nearest to the people.

Good governance is certainly not these tea parties, “Owambe”-motivated media tour by the Federal ministry of Information.

Under the current atmosphere, it is certainly difficult for Nigerians to be informed of how so well transparent and accountable are these state officials because pecuniary interest may over shadow any expected objective of balanced and qualitative independent assessment.