THEWILL EDITORIAL: Public And Judicial Sanction Against Homosexuals Is Unwise 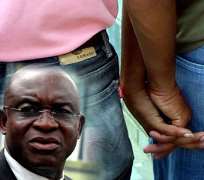 (THEWILL, SAN FRANCISCO) - The President of the Nigerian Senate, Col. David Mark (rtd), is not a man known to shy away from the formal or informal media or from controversy. And especially in the case of the same-sex marriage legislation, he has maintained the course.

“We will not compromise on this. I want to invite you all to join the crusade of decency in our society. There are many good values we can copy from other societies, but certainly not this one (same sex marriage),” he recently told the media.

Once the bill is passed, and President Goodluck Jonathan signs it, anyone who violates the act will be subjected to a maximum of 14-years imprisonment. 14 long years!

Should a court sentence two consenting adults to 14 years for actualising their affection, then, how many years would it sentence heterosexuals who are sexual predators, to?

How many years do you sentence middle-aged men who have carnal knowledge of, and in some cases, impregnate girls who are under 17 years of age? Not only does the punishment not fit the crime; we believe that homosexuality is not and should never be criminalised.

Furthermore, who is more dangerous to the society: homosexuals or politicians who steal millions and millions of dollars from the public purse?

There are better things the Nigerian National Assembly should be spending its resources on. And especially in the case of the senate president, there are many more things he should be focusing on – instead of the private dealings of private individuals in the privacy of their homes.

If Senator David Mark is sincerely interested in championing decency and decent behavior, then, we suggest that he takes on such noble causes as child-labour laws; economic and political federalism; sovereign national conference; child-trafficking and modern slavery; the welfare of our veterans who served in the nation’s armed forces and the police; the retirement benefit of federal civil service; funding our educational and medical institutions, etc.

What is there to gain by legislating against private acts that do not injure the populace or the country? The constant and unending abuse and threat against a section of the populace is uncalled for. In recent years, there have been several public sanctions against the lesbian, gay, bisexual, and transgender (LGBT) community in Nigeria. Sanctions have included outing, shaming, verbal abuse and judicial harassment, stoning, and physical beatings.

On January 15, for instance, several media houses and the social media reported that three men were stripped naked, paraded, and allegedly lynched in Ekwe, near Umuka in Njaba Local Government Area of Imo State.

It has also been alleged that in extreme cases, members of the LGBT community have been killed. None of the aforementioned actions against this, or any other community, should be tolerated or encouraged; and those who engage in violating the human and or civil rights of fellow Nigerians should be brought before the courts.

In human societies across the world, there are several sexual orientations, i.e. homosexual, polysexual, bisexual, pansexual, heterosexual, and asexual. In essence, nature and the human environment recognise and allow a rainbow of sexual preferences and orientations. None of these taxonomies can be said to be recent phenomena. And neither can they be said to be aberrations, or outcomes of environmental, physical or mental deficiencies. Such questions have been put to rest by leading medical associations abound the world.

The Royal College of Psychiatrists, for instance, asserted that: “Despite almost a century of psychoanalytic and psychological speculation…It would appear that sexual orientation is biological in nature, determined by a complex interplay of genetic factors and the early uterine environment. Sexual orientation is therefore not a choice.”

What this means is that anyone can be born gay, lesbian, asexual, pansexual, or homosexual. For some people, such orientation and or preference manifest itself very early in life; but for others, its manifestation may not be apparent until well into adulthood. After all, communities the world over are replete with men and women who became aware of their orientation and or preference during or after marriage. Considering the pain, the agony and the lifelong rejection associated with orientations and preferences (other than heterosexuality), not many would consciously want to be anything but of the dominant and universally accepted taxonomy.

For instance, more than 45 percent of all Nigerians who are Christians and Muslims engage in fornication and adultery; yet condemns homosexuality. More than 80 percent of all Nigerians give and or take bribes; yet, they condemn homosexuality. And unknown number of the economic and ruling class have concubines and paramours; yet, they condemn homosexuality. And many more, have at one time or another engaged the services of male and female prostitutes. What’s more, millions of Nigerian men and women have children outside of wedlock. For the mullions of Christians and Muslims who condemn the LGBT community, how hypocritical they must be and feel.

Sexual activities between two consenting adults should not be a matter for public debate and condemnation. And for that matter, it should not be legislated against. And especially in this instance, lesbian, gay, bisexual, and transgender activities – activities that are usually performed within the confines of the bedroom – are private matters. The heterosexual community does not have the rights to peek into such private matters. And the government, especially, should not peek into and or legislate what fellow Nigerians choose to do or not do in the privacy of their homes – so long as lives are not lost, or the security and safety of the nation is not compromised.

In addition to condemning the actions of private and public individuals, and that of the Nigerian government, we also condemn what is going on in places like Mauritania and Sudan where homosexuality is punishable by death. And in countries like Uganda, Tanzania, and Sierra Leone where “offenders” can be sentenced to life imprison. In at least 35 African countries, life and living is made harsh and brutal for members of the LGBT community.

We reject and condemn all judicial, social, communal and extrajudicial actions against the LGBT community in Nigerian and elsewhere. Members of the LGBT are no less human because of their sexual orientation. There is no moral justification to subject them to discrimination, mockery and shame. They are entitled to the same fundamental rights that all heterosexuals enjoy.